By DoomzGay, history, 20 months ago, translation,

I'd like to spread this topic (for a while it was only in russian), to engage more users to this problem.

Well, i'm quite lying, not so much good in this evening. Why? I think, you already know the main idea. Yea, it's another round from GreenGrape!

It all started on a carefree Sunday morning. Nothing signs a trouble for me. In a long waiting of evening rated contest I was watching past 'The International' matches (Winstrike versus IG to be more precise), when i had got a PM message: "Hey, today is a GreenGrape round!". With trembling hands i typed codeforces.com in the address bar, and saw Codeforces Round #505 (rated, Div. 1 + Div. 2, based on VK Cup 2018 Final) announcement. Yeah, exactly he is. With a spoiled mood and not so enthusiastically you're still waiting for a contest, which will bring you only more pain and another portion of disappointment...

Let's finish with a lyrical part, and start more constructive analysis. At the beginning i'd like to say, that i have nothing against him personally. Yes, there will be a lot of subjectivity, but I would not write if it was only my opinion. So, less words, more action.

I'd like to analyze 3 different contests from GreenGrape. They will show up in a chronological order.

What do we see at the first look... A lot of hacks in top (yea, hackforces there we are), a 912C - Perun, Ult! was succesfully submited by 13 people (need to add that the 912E - Prime Gift also got AC only by 13 users), in fact it's just a implementation. Everyone would think: "Geez bruv, so damn good that i missed this contest". I, unfortunatelly, participated. And I'd like to say it wasn't the best time in my life (maybe better to say a waste of time). Well, shit happens, but that day we cannot realize what so we see later...

Not everyone had time to move away from the pain shock, as our favorite problemsetter decided to give another BOMB! Let's take a look at the contest results, and here.. Oh, people have smth like 25 hacks. Attractive tasks, you would say. Implementation, brute force, brute force and greedy, say I. After that, my circle of friends began to doubt the abilities of Andrew as a problemsetter, but he wouldn't stop!

Exactly this contest became a final impulse to write this blog. The contest is just over, so i think you have no time to move away from a burning chair (or whatever you're sitting on). I just want to add that during the writing of this blog, the announcement of this contest has already received about 200 dislikes, which indicates the agreement with me of out community, so I'll just leave it here. 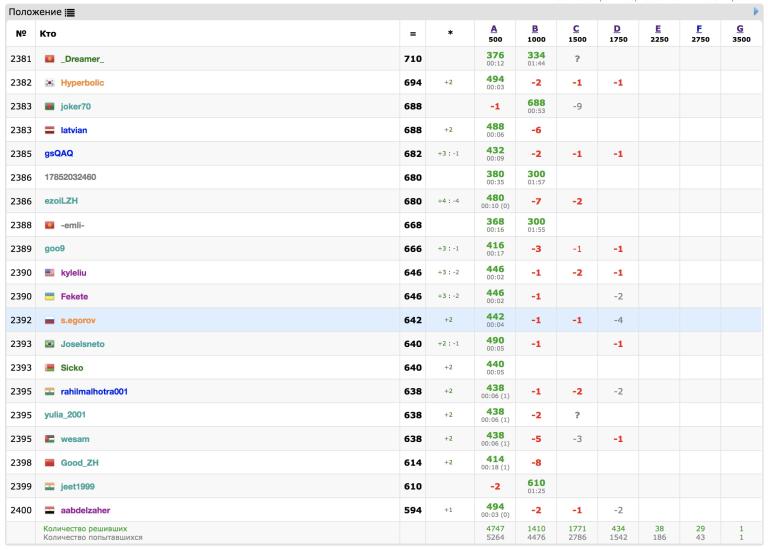 In conclusion I'd like to say that GreenGrape is a person, with no abilities in problemsetting (direct quote). Not the most enjoyable tasks (it was the second time when i stop participation in contest during it) in couple with a shitty pretests (tests, as i think, too, 'cause we don't need it when we have hacks!) turns it into a real hell. This is an absolute disrespect to the people for whom these rounds are prepared, because he managed to spoil the round on the tasks of VK CUP! I have a lot of emotions and wishes, but I hope everyone will find in this blog an echo of his inner voice.