By Xephy, history, 5 years ago,

Wow, I haven't written a blog in a while haven't I? And as it appears, every single one of my blogs had something to do with either this website's flaws (i still want my marshall islands flag!) or humor. Well, this blog is not going to be either of those! Instead, what I'm going to talk about is...

Since this website has an awful lot of people that do lots of hard work for the community, we have to acknowledge them in one way or another!

Yes, we already had Codeforces 5th anniversary badge of honor, but what about those people that do hard work for the community, that didn't spend their money on the website whose community they are helping? Well, these badges are for those people! Given to the greatest of the greatest, this badge is given to every single person who can be considered to be a part of Codeforces team! They have such noticeable people such as MikeMirzayanov and... MikeMirzayanov!

To be honest I don't know if there are any other people in the Codeforces team, so maybe this badge can be scrapped, but I still think that it's a neat idea! Or you can also give to employees of some other programming websites such as maybe... e-maxx? Is he even alive? Probably going to be the most popular one since... there are a lot of problemsetters on this website, around 500 maybe? But hey, isn't that a good thing? Thanks to those people, this website still hasn't died out yet! Awarded to those who truly are the pinnacle of this website's community, those people who almost everyone knows, and most importantly, those who we should all thank for... just being on this website actually. Those are the people who don't belong in previous two categories, but are still just as crucial to this website's health as them.

Maybe this badge should be awarded to those people who have at least X contribution? Maybe 100 or 50? Since there're only ~260 people with 50 contribution or more. Or it could be given by a community vote!

I think that this will be a great addition to the website, since it could be used as an instrument to make our community stronger and people that do the hard work be noticed more easily.

Maybe the design could use some more work, but overall I see nothing bad happening with this feature added. Just please keep a circle. Because everything is better if it's SPHERICAL!!! 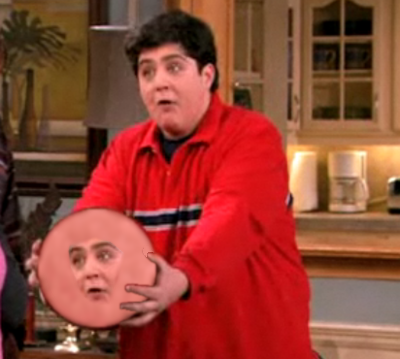 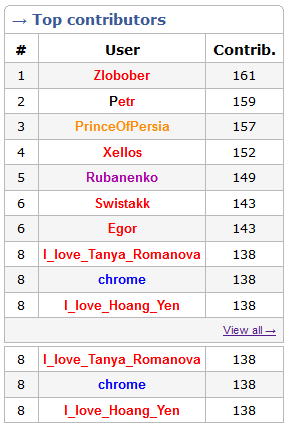 We need to have someone name their account I_love_chrome, just for the laughs

The ACTUAL Best Way to Become a Better Programmer...

If you do not wish to read a lot of useless information, (just like my latest satirical-serious blog) skip to the latest line of this entry, to see what I want to say in this blog

So I've been trying to write as much contests lately especially on CodeForces and Hackerrank, because after all, I'm clearly one of the most

Anyway that's where the contests come in! If you truly wish to become almost as great as I am, then you will need to solve contests! They are much more interesting than any kind of upsolving or virtual gyms, because unless somebody can see the results and take them seriously. And don't worry if you're Candidate Master or higher, but the contest is only for Div 2! Just create another account! It's literally that easy!

Who cares about those scrubs that may lose the motivation because such "tryhards" as you are creating new accounts to get their rating up, am I right? Who cares that their rating may go down, because you took their oh so precious first spot? They're not as good as you, so they are irrelevant! Just look at Codeforces Round #301 (Div. 2)! Out of top 9 contestants, only 3 of them are not new accounts! They're not as good as the people whose main account may have 2000 or more rating that just decided to created a new account to have a higher rating on their overall record! Who cares about them?

"But Xephy! When should I start?", you may ask. And I'm here to give you an answer! Just register to the closest available contest! Except those filthy "Testing Rounds" and pfft " Educational (educational, yeah sure, ain't nobody isn't buying that crap Mike, it's not a real contest unless your rating changes!) Rounds" They are for filthy casuals and scrubs! Just look:

Or you know... Just don't. It doesn't matter how much rating do you have, or how many accounts do you have raised to Div 1. What does matter is your performance during the contests when it MATTERS. Oh dropped a little rating during the latest contest? Doesn't matter, if you at least know how to solve these problems afterwards. Messed up during the contest and couldn't solve an easy problem? Don't even care about it! Just try to solve some other problems that are solvable with this topic/algorithm so you won't forget about it next time!

And those people? That create new accounts just for the sake of screwing other people over and stealing the top places? Just ignore them. YOU know your level more than any other system. That rating number? That nickname color? They are just numbers/colors. They don't mean anything, as long as you try and improve, these two will change accordingly.

Don't look at other people. Look at yourself. And remember to always be positive! Xephy out!

Being Candidate Master Before Color Revolution and be like... Yes, I know that it's been ~3 months since the color revolution. But I've played Undertale recently and I had to make a joke like this.

P.S. no but srsly go play undertale, it's a pretty good game.

Hello, you're about to read a blog article which contains a lot of cringe-worthy jokes, so if you're not here for the dumb 15-year old humour please skip to the latest line of this blog entry.

So I've been switching countries on Codeforces lately because I wanted to switch flags up a little bit, since there are a lot of countries with pretty neat flags. One of the countries whose flag I became really intrested in was the "Republic of the Marshall Islands". It even sounds amazing! So I go to settings to switch my country. 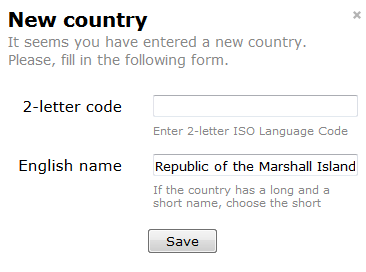 Wait what the..? But... This is actual Marshall Islands' ISO code... 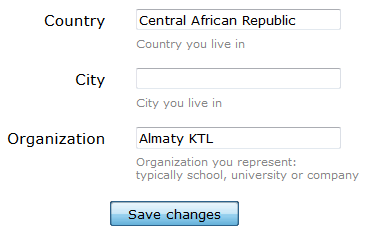 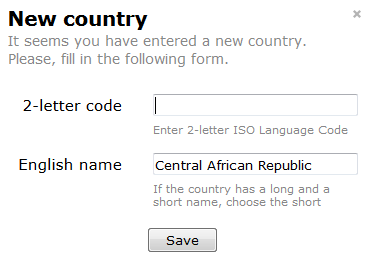 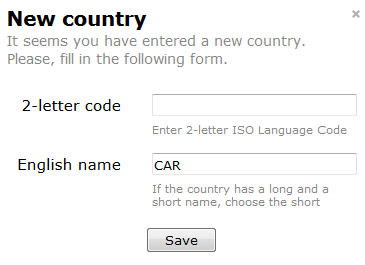 Nope. Not it either.

Okay, I suppose I have to.

Getting slowly frustrated... Let's see what countries have pretty flags as well? There has to be another one...

THERE! Solomon Islands! Let's try that! 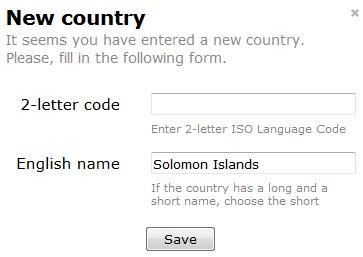 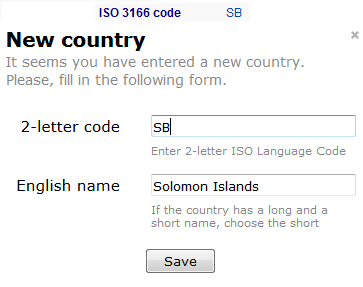 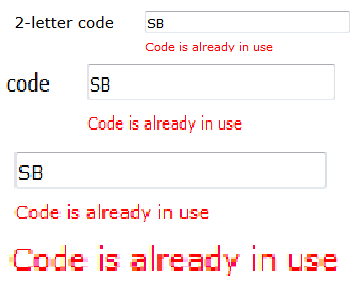 OKAY! I'VE HAD ENOUGH! I'LL JUST USE KAZAKHSTAN'S FLAG, IT CAN'T BE WORSE THAN THAT NIGHTMARE INDUCING CRAP!

So I've been trying to solve a couple of problems lately, you know standard stuff, and I open this cute little problem named 466C - Number of Ways, when suddenly, images from problem's statement weren't loading correctly. I tried to load it in both English and Russian, but alas, to no avail. I tried to download it from different web browsers, thinking it might be a problem with Firefox which is my main browser. Nope, not it. I tried to access it using my friend's laptop, but with no success. Does anyone else have this problem, and if you don't, could you please upload a screenshot of problem's statement please? 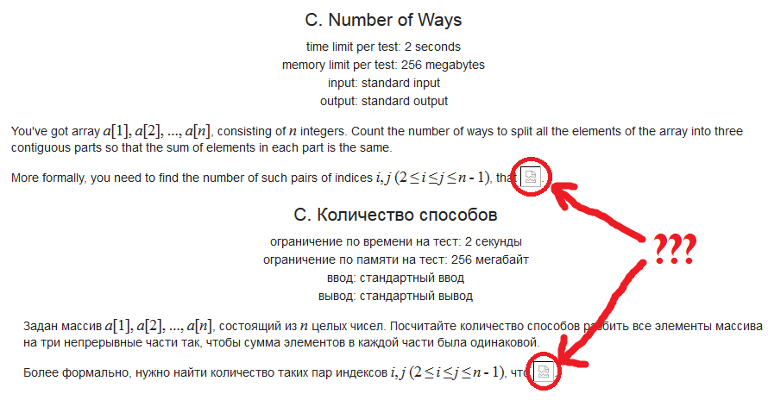 EDIT: Here it is (thanks to dcms2)

If you are trying to solve some old problem in problemset (ex: 196A - Лексикографически максимальная подпоследовательность) if you look at the "Attention" bar at the right you can clearly see the typo in the text... It says "than" instead of "then".

On a more serious note, please add search of problems by tags. pweese?

The following blog contains a lot of whining and absolutely useless information. Be cautious, as you may lose your faith in humanity after reading this post. Apologies in advance. TL;DR at the bottom of the entry.

Hello everyone. As a person that extremely enjoys competition, and thus enjoys Codeforces Rounds I really want to adress this issue. Everybody likes hacking other people's solutions and people that GET hacked are either upset about it or are happy (because you know, more room for improvement). But sometimes when people don't hack your solution AND you certainly know that there is a test case that your solution fails at, you quickly look for a bug in code, fix it and re-send it. You see, I got this issue once. But the test case that my solution was failing at was not present in system test cases.

8244051 — Initial Submission resubmitted after the contest

Guess what? My initial submission passed system tests but couldn't pass my own tests.

However my solution doesn't print out ANYTHING. And yet, it passed system tests. I would understand if it only pretests were that weak (you kno'. to farm hacks) but system tests are not supposed to be that weak.

TL;DR System tests are weak, I'm butthurt and I've been holding in for 3 weeks.