I have been with codeforces for a long long time. It has been always my thought that why codeforces rounds are only 2 hours (usually). The things that I am sharing right now are just my opinions.

I think a CF contest's difficulty is chosen by looking at the very topmost population. Maybe like 5% of the population. They should complete or almost complete the problemset within the contest time. Well, that's fair I guess. But from the top, 50% or even maybe from the top 25% would feel that they could solve another one if there was more time. That's true for everyone else too I guess.

Let's say a usual codeforces round is now 3 hours. What are the pros? Most of the contestants will get 1 extra hour to think with 1 or 2 more problems that they don't get to solve within 2 hours. Speedforces effect should be reduced at least a bit. A slow but knowledgeable contestant might end up higher on some fast contestant who used to be on top of him most of the time. Doesn't everyone want to be separated by problem solve count rather than the speed! And 2 hours of the contest does not let you much time to recover. 3 hours of contest would let you much time to recover and could enforce different strategies. Some problem requiring 90-100 minutes to solve for a certain person is almost impossible to solve within the 2 hours contest time.

What are the cons? The topmost guys would finish the contest very early. But it also happens in 2 hours contest too. Some guys finish X problems and they still had 30-40 minutes which is very low to solve the next one. Another problem is they have to sit through the whole contest because of hacks may be. Some people might be unable to find 3 straight hours of free slot. And is it a problem that 3 hours of contest would put heavy pressure on the server (maybe in terms of cost too)? I don't think this one is an issue though. One problem could be someone might find it better with 4 hours rather than 3 hours, some might find it better with 5 hours of the individual contest. It's a never-ending debate about what is suitable.

There could be many other pros and cons. But my point is maybe 2 hours is too low for a contest. I think most of the contestants put an extra hour at least on the almost solved one/thinking for a long time one on the pen-paper or in the comment section may be. Putting that hour in the contest itself might be more interesting.

There has been several blogs similar to this. I know about TOP 15 most popular users on codeforces and Who is the most popular?. But as none of these are updated, I thought this might be helpful.

I have just calculated the most popular handles in Codeforces. I only considered those handles which have at least one rated contest. Begging my pardon to them who hasn't participated in any rated round. And here, the popularity depends simply on the number of people you are friend of.

The complete standings can be found here(This may took a while to load at the bottom).

Can anyone provide me or share some other resources to learn more?

And it would be really helpful if you can share some problems regarding generating functions. Any tips and tricks would be also helpful.

Is it possible to find MinCost MaxFlow if there is a negative cycle on the network?

For clarification: in this given network, each edge has unit capacity and the number denoted on each edge defines the cost. A is source and D is sink. In this network MaxFlow is 1 and MinCost is -3. 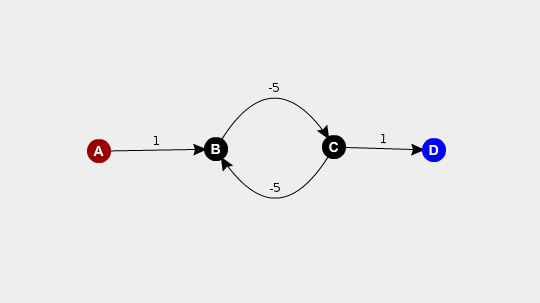 How to calculate the MinCost properly?

Can someone provide a few problems solvable with Lagrange Multiplier ? I have solved just one problem UVa 12407 and want to try some more.

Making sure one is participating in codeforces round !

This might not be a real matter of concern but specially in Div1 contests a lot of contestants do not submit anything if they are not able to solve any problem. Last round(round #317) their was an opportunity to get t-shirts and top 200 is quite achievable if it is a lucky day for you. So,normally you would expect a lot of contestants in that contest. But their was less than 700 participants. The round was really a tough round and I think more than 300 people were there who tried but could not solve any,thus they do not submit any. It is quite disappointing for them who solved some and would get better rating if they all attended as they went zero solve in that contest.

Again,In some contests participants usually try for B rather than A because solving only A would not boost his rating.And when they can not solve B then they do not submit any. This is looking quite disappointing to me. So, I am asking if it is possible to make any system that one has to make sure that he is rated for this contest either he submits any or not and it is at the very beginning of the contest ? If you do not make sure at the very beginning then you are not rated for the contest. People can not even cheat with another account because they have to make sure at the beginning of the contest if they are attending or not. In few initial minutes they will not be able to decide if they can manage to solve that task they decide. So actually one has to be predetermined if he is really attending the contest or not.

If someone can not manage to prepare any solution to submit for any problem why would he want to make lower his ratings (Although I saw one of my friend got WA on testcase1,problem A because he tried the whole contest and can not generate any solution and he wrote that he did not deserve to be in div1) ! But the fact is he deserves the lower rating and one who solves deserves higher rating as there would be more participants. So,is it possible to do something to make sure that one is participating ?