This idea will definitely not show up in easy problems, and is pretty uncommon. Nevertheless, it's a cool concept and it can be used to “cheese” somewhat difficult problems, and I haven't found any resources that describe it well.

A Euler Tour Tree is a representation of a dynamic forest of trees. This means that, as long as the graph never contains any cycles, you can support the following operations in $$$\mathcal{O}(\log{} n)$$$ per operation:

Definition of an Euler Tour:

The Euler Tour of a tree is defined in various ways, depending on the source. However, I've found that one specific way is generally better in this context. The idea is to store the tree as a list of directed edges in a DFS order. 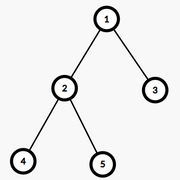 The main idea of Euler Tour Trees is to store the Euler Tour of the tree (hence the name) in some kind of balanced binary search tree (BBST). The split/merge operations offered by BBST's will prove to be extremely useful while implementing the add edge and delete edge operations.

There are a couple of helpful properties in an Euler Tour that we will need:

However, there is one issue that arises: a tree of size $$$1$$$ has an Euler Tour of size $$$0$$$. This is especially an issue when we're using Euler Tour trees, and we're representing a forest of trees (so a degenerate case is very possible). To deal with this, we'll add an extra self-loop $$$(c, c)$$$, for every node $$$c$$$, in the Euler Tour such that the loop occurs right after we enter its corresponding node. This provides a way to support storing values on the nodes as well, not just the edges, when calculating our aggregate operations.

Here I'll describe how each of the different operations we're trying to support change the Euler Tour, and how we can reflect those changes in our data structure.

Important note: For all future queries, to locate an edge $$$(a, b)$$$ in the BBST's, you can store a map from "edge" to pointer in the BBST.

The reroot operation will be used in the implementation of the future operations, so I will describe it first. The function $$$\text{reroot}(c)$$$ does the following: modify the structure so that it represents the Euler Tour such that you start the DFS at the node $$$c$$$. Recall that any cyclic shift of the Euler Tour is still a valid Euler Tour, so all that's required is finding how much to cyclically shift the edges by (the actual cyclic shift operation can be implemented in $$$\mathcal{O}(\log{} n)$$$ with a BBST). The self-loops that we included make this extra convenient; shifting the tour such that the edge $$$(a, a)$$$ is the first in the list will reroot the tree exactly as intended.

After performing these three operations, the tour will be split into two independent parts (both of which are valid tours of the subtrees)

Weights can also be updated, by just finding and updating the corresponding edge in the BBST.

Thanks for reading the blog! Let me know if you have any suggestions about additions/changes to the blog, or additional sample problems.