By marat.snowbear, 8 years ago, translation,

Let's use the usual Div 2 problem A approach — the naive one. We will track the interval which might contain the number we're guessing. With each of the query we update this interval. If at the end the interval is non-empty then we output any number from it, otherwise the result is "Impossible".

Let's solve this one greedy. All we need to notice is that the optimal solution will be to place first the groups with biggest sum which they are ready to pay. For each such group it will be optimal to allocate the smallest matching table. The input limits allow to do a full search when looking for a table.

One thing to notice for this problem is that if we cover some interval with a progression then it will better (at least no worse) to include as many elements to the right of it as possible. So the solution is to greedy — find the leftmost number not covered by a progression, start a new progression with that number (the interval covered by that progression will be of size 1) and then try to extend this interval to the right as far as possible. Repeat this step until all the numbers are covered. One thing you should pay attention to is which numbers can be covered by one arithmetic progression, for example:

Let's look at the graph given to us in the example: 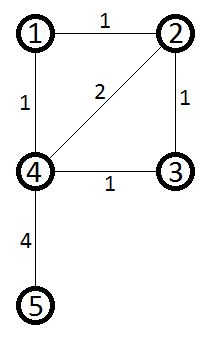 We need to count the count of the edges on all the shortest paths between each pair of vertices. Let's do something easier first — instead of counting all the edges we will count only those which have the destination vertex on its side. For example here are the edges belonging to shortest paths from 4 to 2 which are connected to vertex 2: 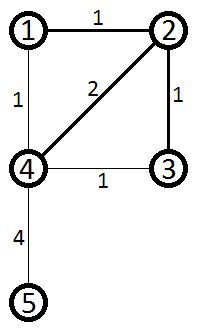 In other words the answer for vertices s and d will be equal to the sum of inEdgess, v for all vertices v, which belong to any shortest path from s to d. So the only thing left is to calculate these S and inEdges. Both of them can be easily calculated if you have minimum distances between all pairs of vertices. And these distances can be calculated using the Floyd-Warshall. So the full solution is:

Each step has a complexity O(n3).