So in this series, which I will try to continue, I will talk over hacks at Codeforces Rounds. I will try to do some statistics and take a look at most common mistakes in passing contests.

It is my first article related to hacking (and first at all :)), so feel free to suggest something, correct me on some errors or mistakes (my English still can be much better :)) and tell about your hacks. Thanks in advance!

Update: added chart with hacks over time and first hacks.

Update: the handles are now full of colours, with many thanks to awesome sylap97!

Update: added section "biggest gap" (between rating of the hacker and defender).

Really nice graph made by soon (thank him here): 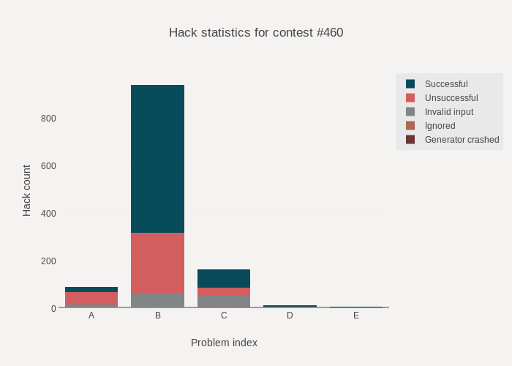 And my graph showing hacks over time:

of all tries!). But still, every solution has at least one successful hack.

460B - Little Dima and Equation

This problem had a lot of successful hacks! The most frequent mistakes were:

And there was pretty wrong solution which can pass the pretests: checking all numbers to some number fitting into time limit (like 1000000).

There were two most frequent types of hacks. First one was just giving big n, m and w. In this case solutions with complexity O(nm) described in tutorial was failing. Second one was using the fact that the result can be bigger than 109. Many people using binary search just forgot about it and set upper bound to just 109. Simple hack:

All hacks were just big x and y and k = 3. It was destroying naive approach in such case of k.

The one and only hack for problem E was this one, the solution reached time limit.

The one and only hack for E was done in the very last minute of contest. Congratulation 4erneff!

In this section I took all successful hacks and looked at difference in rating between hacker and defender. There were 18 "new" hackers (it was their first contest), so I simply miss them from obvious reasons.

Thanks for your feedback!