By Neodym, 6 years ago, translation,

Recently I've met next problem: set of n lines is given, and they are in general position: no two lines are parallel, no three of them intersect at one point. This set of lines cuts plane into regions, some of which have finite area. Lest calculate an amount of triangles. Let f(n) be a minimal possible number of triangel, and g(n) — is a maximal number of triangles, which can occur.

It is true that f(n) = n - 2 for n ≥ 3. It's been unproven for hundred years, while somebady manage to use tricky matrix method (see article "Triangles and disasters").

Unfortunetely I can't find any inequalities for g(n) in the Internet. One can obtain trivial inequality using Euler formula: let's rewrite a picture as planar graph — where are vertices are line intersections, and edges are segments between vertices(which aren't intersect with some other segments inside). Let amount of vertices be V, amount of edges be E, and amount of faces (parts with finite area) be F. On given picture V = 10, E = 15, F = 6. Actually it's easy to get that g(5) = 5.

As it's known from Euler formula, V - E + F = 1(we don't count a face which is placed "outside"). It can be calculated easily that V and E equal

and n(n - 2), respectively, that's why amount of parts with finite area is equal to

— In fact, that gives a trivial inequality on g(n) as something of order

So, we have a trouble — is this estimation good? Does an example with cn2 triangles exist, or maybe there some better estimation? To show, how this problem is untrivial, I'll show you an example which proves, that g(9) ≥ 14: 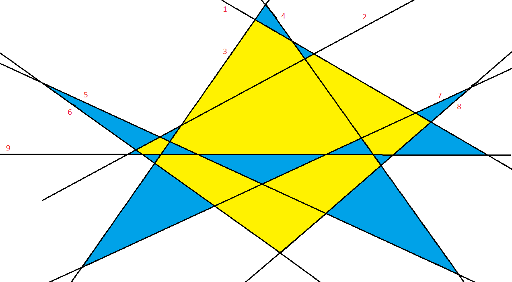 So, a challenge for society: I can prove (with example) that g(n) > c * nlog(n), where c is some predeterminated constant. Can somebody build an example with same amount of triangles? With better amount?:)

update: Examples which prove that

was found by Endagorion and Ripatti, so, the topic is closed:) Example: let's draw a table with n rows and n columns, which almost parallel to each other. Than it's easy to draw 2n - 1 line, which are almost parallel to diagonal of this square, so that i'th line cuts i'th diagonal, so the amount of triangles is quadratic.