By Alex_KPR, 9 years ago, translation,

Hi everybody! I’m going to leave a really short post while our last guests are checking in the hotel. 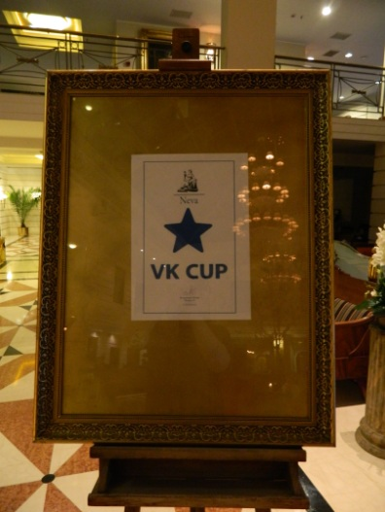 Hotel Kempinski, that is offered to the VK Cup coders, is very young: it opened as much as five years ago. According to the official letter, it has 197 rooms and suits, a restaurant on the ninth floor with a gorgeous view, a room for tea ceremonies and a fitness center with a sauna. Some unofficial sources regard this hotel one of the best in the city! I don’t know whether it is true or not but the impression is absolutely positive.

I was lucky to come to St. Petersburg rather early, that is, yesterday, so I witnessed the arrival of the Japanese and the Chinese, rather exhausted after the journey. Having seen the timetable, they laughed much as iwiwi associated rafting with cold bubbling water. That’s where an unruly raft sent him the day they had a rest at the Petrozavodsk Training Camp.

At night I had a small walk about the building with a camera. The guards turned out rather nice and good-natured people; they insisted on having a look at my photos and demanded to delete any that had hotel staff on them. So I lost some fruit of my toil and had to escape to the restaurant and calmly walk to my room from there.

Next day Ra16bit and rizar talked excitedly about a VIP bus that rode to the plane, got them to the VIP zone right from the passenger boarding stairs. There they waited for a VIP porter with the luggage, got in a VIP taxi and rode to a VIP hotel. On the other hand, during the breakfast Edvard told Gerald and me, how much he hates all this mock antique design and all this antique furniture, bought on auctions for a fortune. =)

But as we say in Russia, it’s better to see something once than to hear about it a hundred times. There aren’t many photos, bad luck :) The opening ceremony will start soon and according to the timetable, it will smoothly transform itself into a festive dinner and boating. I’ll try to keep you up to date!