Yet Another Rating System for CodeForces

By nikgaevoy, history, 12 months ago,

Finally, I finished the implementation of an improved version of TrueSkill rating system that EbTech named "TrueSkill from St.Petersburg".

Important notes on the results

Note that those results were obtained by running on the EbTech's testset (rounds only before Codeforces Round #645 and team contests excluded) and thus do not represent the current standings on Codeforces. Also, the file contains only users with at least 10 contests and at least one contest in 2020 (otherwise, the file would be very large). However, you may obtain full rating by running the algorithm on your computer, it should take about a minute. Also note that the results may seem not very impressive since I chose the first parameters out of the blue and they should be changed of course.

What is this rating system? 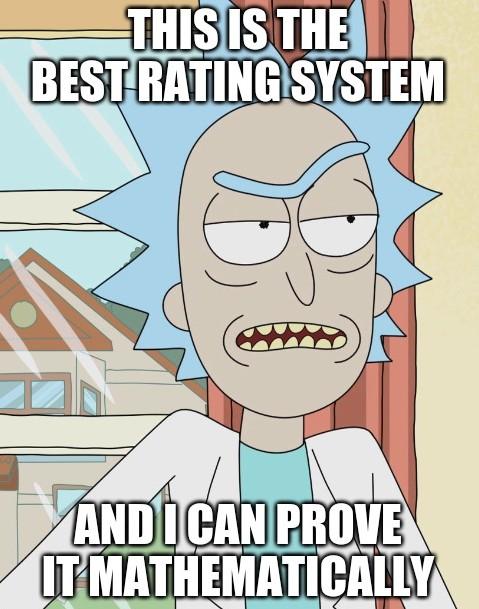 As I already mentioned, I haven't spent lots of time choosing the best parameters for Codeforces case, so there is still some work with data ahead.

Which distribution expresses player rating and performance better? Any choice is very debatable. Currently my implementation uses normal distribution, but it could be easily replaced with logistic or any other distribution, the only thing you need to do is to implement operators like multiplication, division, addition and two multiplication on indicator operators (last two are more tricky than the others, but still not very hard, see article appendix for explanation what to do and this file as an example for normal distributions).

Codeforces standings have an unusual artifact of a large multiway tie of a players with zero score which does not perfectly match the theory and possibly affect those players' ratings too much. There are many ways to deal with this problem, e.g. exclude them from rating at all, make separate tie-$$$\varepsilon$$$ for them, etc.

I'd like to thank EbTech for starting this discussion that led us here, S. Nikolenko for pointing the solution out to me and MikeMirzayanov for great Codeforces system that crashed during my experiments only twice.