By Monogon, history, 5 months ago,

How can we visually tell whether a number $$$x$$$ is covered by an interval? Well, we can represent it by a point $$$(x, x)$$$ in the plane. Then we can imagine that the interval's 2D point can see down and right, and the interval covers all the points it can see. 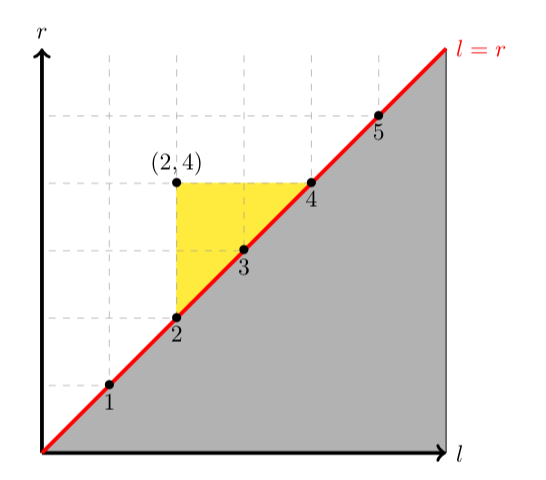 Great, we have a visualization for how an interval covers points. But we also want to talk about how intervals relate to each other. For example, intervals can be nested, or they can be disjoint, or something else.

Let's classify the $$$6$$$ possible ways two intervals can relate to each other. 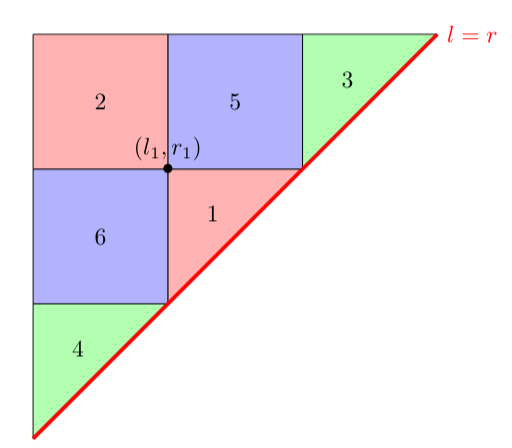 Next, we're going to look at some example problems.

For an interval to be in region $$$2$$$, it must be left and up from it. Let's process all intervals in increasing order of $$$l$$$, so that the "left of" condition just becomes "previously processed". So, we just need to ask for each interval, if there exists a previously processed interval above it.

If any previously processed interval is above $$$(l, r)$$$, then definitely the one with maximum $$$r$$$ will be above it. So we don't need to check all the previous intervals by brute force: just remember the maximum $$$r$$$ value seen so far and remember it.

There's one small issue we skipped over: when we sorted all intervals by $$$l$$$, we didn't say what to do in the case of ties. In other words, if two intervals have the same $$$l$$$ value, should we process the lower or higher one first? Well, if there are two intervals with the same $$$l$$$ value, then the larger one is considered to cover the second. This means the interval with smaller $$$r$$$ should definitely be processed after the one with larger $$$r$$$. So in the case of ties for $$$l$$$ value, we should process them in decreasing order of $$$r$$$.

Now we've solved one of the two parts. For the other part, we want to check for each interval, if it covers another interval. We can actually use the exact same idea, except we will sort decreasing by $$$l$$$, break ties in increasing order of $$$r$$$, and remember the minimum $$$r$$$ value of all processed intervals.

This is very similar to the previous problem, but this time we want to count ranges instead of just checking. Just like last time, let's start with only focusing on counting for each interval, how many other intervals contain it. Also like last time, let's process all intervals in increasing order of $$$l$$$, and break ties with decreasing order of $$$r$$$.

Again, the other half of this problem is the same except for the sorting order and we want to count the number of $$$r$$$ values below instead of above.

The total complexity will be $$$O(n\log n)$$$, due to sorting and answering queries.

Given $$$n$$$ intervals, find the size of the largest possible subset of intervals with the following property: for any pair of intervals, one contains the other.

First, we can describe the "nested subset" property in a nicer way: If the intervals are sorted decreasing by length $$$r-l$$$, then the first interval contains the second interval, and the second interval contains the third interval, and so on. Geometrically, this means we're looking for a path of points that moves only down and right. Now we can see that this is basically the same as the longest decreasing subsequence problem.

We can solve this problem in a similar way as before: sort all intervals in increasing order of $$$l$$$ and break ties with decreasing order of $$$r$$$. This time, we're going to use dynamic programming. For an interval $$$[l_i, r_i]$$$ we'll compute $$$dp_i$$$, which we define to be the largest nested subset of intervals such that $$$[l_i, r_i]$$$ is the smallest interval. The final answer will be the maximum $$$dp_i$$$ value.

where we assume $$$j$$$ is only allowed to be a previously processed interval. If there exist no valid $$$j$$$ then we set $$$dp_i=1$$$. Just like the Nested Ranges Count problem, we can maintain a data structure that can support point updates (to insert a new $$$dp_i$$$ value) and range max queries (to find the maximum $$$dp_j$$$ value corresponding to $$$r_j\ge r_i$$$). For example, a segment tree that supports range maximum queries will work here.

The total complexity will be $$$O(n\log n)$$$ due to sorting and segment tree queries.

Let's say that a rectangle is red if it came from the minimum case, and blue if it came from the maximum case. First, notice that no two rectangles of the same color intersect because a range has a unique minimum and maximum by our tie-breaking rule. Our task is to calculate how many lattice points are the intersection of a red and blue rectangle, and both of them have the same "group number", namely the popcount of their corresponding $$$a_i$$$ values.

For the rectangle intersection problem, we need our segment tree to maintain two things: 1. maximum value on a range, and 2. number of occurrences of the maximum element. It needs to support range increment/decrement updates and range queries. When the sweepline enters a rectangle, we increment its range, and when it exits a rectangle, we decrement its range. A value $$$2$$$ in the segment tree means there are both red and blue rectangles covering it, so the number of occurrences of $$$2$$$ describes how much intersection there is between red and blue at the sweepline's current position.