By mkisic, history, 12 months ago,

I don't know where should I report this situation so I am writing this blog.

ppavic, this guy has fear of losing his rating on some rounds, so he is using his second account, fbosnjak_, for those rounds. I know that because I was with him today in room during the contest and some other codeforces members (jklepec, Gabrijel, ...), which were with us in room today, can confirm that.

I hope that admins will ban his accounts.

By mkisic, history, 14 months ago,

There are a lot of competitive programming coaches who offer online lessons. What do you think, should Codeforces create some subpage where coach can provide information (like prices) about himself?

In chess world, popular sites have pages about that. For example,

By mkisic, history, 2 years ago,

Yesterday I found interesting solution for 850B - Arpa and a list of numbers.

But there is way how to avoid this problem. We can see that numbers in array in that example grow very fast so N will be small and that means that we can calculate minimum cost for more primes, so if I set
MAGIC=min(3*10^7/number_of_different_numbers_in_array, number_of_primes_less_than_10^6)
then algorithm will work on that example.

By mkisic, history, 2 years ago,

Hi! I would like you to introduce you to an application called ACStand.

ACStand is program in which you can display results of any AtCoder contest for some list of users which you made before. When I say results, I mean only points which users scored, without penalty. I will add penalty in near future.

Program has 2 modes, official and unofficial. In official mode, program for every user consider only submissions which were submitted during the contest, in unofficial it consider all submissions. 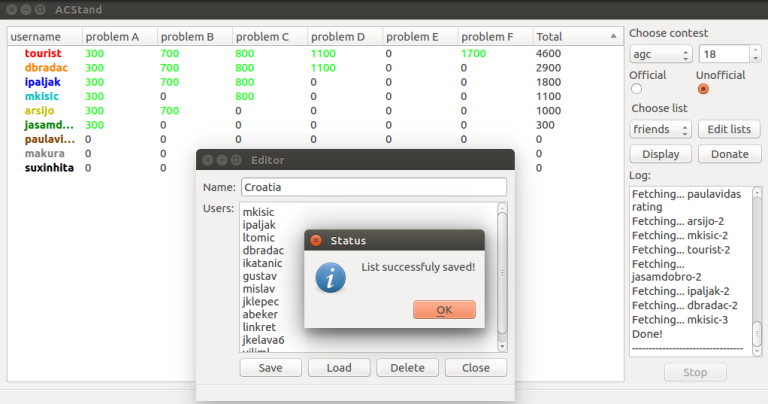 You can find installation details here.