→ Attention
Package for this problem was not updated by the problem writer or Codeforces administration after we’ve upgraded the judging servers. To adjust the time limit constraint, solution execution time will be multiplied by 2. For example, if your solution works for 400 ms on judging servers, then value 800 ms will be displayed and used to determine the verdict.
→ Virtual participation
Virtual contest is a way to take part in past contest, as close as possible to participation on time. It is supported only ICPC mode for virtual contests. If you've seen these problems, a virtual contest is not for you - solve these problems in the archive. If you just want to solve some problem from a contest, a virtual contest is not for you - solve this problem in the archive. Never use someone else's code, read the tutorials or communicate with other person during a virtual contest.
→ Problem tags
geometry
math
*1400
No tag edit access
→ Contest materials
The problem statement has recently been changed. View the changes.
×

So nearly half of the winter is over and Maria is dreaming about summer. She's fed up with skates and sleds, she was dreaming about Hopscotch all night long. It's a very popular children's game. The game field, the court, looks as is shown in the figure (all blocks are square and are numbered from bottom to top, blocks in the same row are numbered from left to right). Let us describe the hopscotch with numbers that denote the number of squares in the row, staring from the lowest one: 1-1-2-1-2-1-2-(1-2)..., where then the period is repeated (1-2). 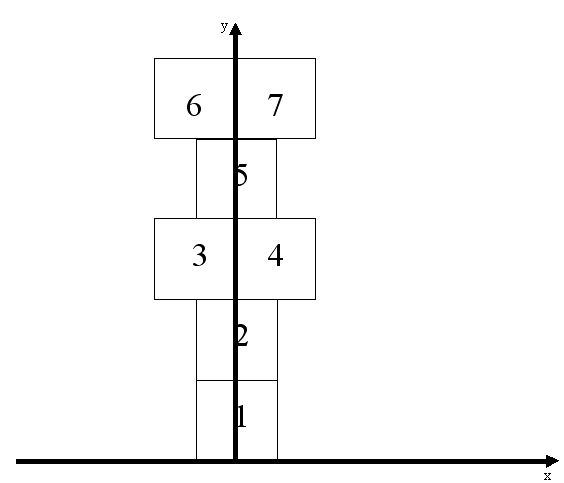 The coordinate system is defined as shown in the figure. Side of all the squares are equal and have length a.

Maria is a very smart and clever girl, and she is concerned with quite serious issues: if she throws a stone into a point with coordinates (x, y), then will she hit some square? If the answer is positive, you are also required to determine the number of the square.

It is believed that the stone has fallen into the square if it is located strictly inside it. In other words a stone that has fallen on the square border is not considered a to hit a square.

Print the number of the square, inside which the stone fell. If the stone is on a border of some stone or outside the court, print "-1" without the quotes.