Rating changes for last rounds are temporarily rolled back. They will be returned soon. ×
→ Attention
The package for this problem was not updated by the problem writer or Codeforces administration after we've upgraded the judging servers. To adjust the time limit constraint, a solution execution time will be multiplied by 2. For example, if your solution works for 400 ms on judging servers, then the value 800 ms will be displayed and used to determine the verdict.
→ Virtual participation
Virtual contest is a way to take part in past contest, as close as possible to participation on time. It is supported only ICPC mode for virtual contests. If you've seen these problems, a virtual contest is not for you - solve these problems in the archive. If you just want to solve some problem from a contest, a virtual contest is not for you - solve this problem in the archive. Never use someone else's code, read the tutorials or communicate with other person during a virtual contest.
→ Problem tags
constructive algorithms
math
*1700
No tag edit access
→ Contest materials
The problem statement has recently been changed. View the changes.
×

Sensation, sensation in the two-dimensional kingdom! The police have caught a highly dangerous outlaw, member of the notorious "Pihters" gang. The law department states that the outlaw was driving from the gang's headquarters in his car when he crashed into an ice cream stall. The stall, the car, and the headquarters each occupies exactly one point on the two-dimensional kingdom.

The GPS transmitter is very inaccurate and it doesn't preserve the exact sequence of the car's movements. Instead, it keeps records of the car's possible movements. Each record is a string of one of these types: "UL", "UR", "DL", "DR" or "ULDR". Each such string means that the car made a single movement corresponding to one of the characters of the string. For example, string "UL" means that the car moved either "U", or "L".

You've received the journal with the outlaw's possible movements from the headquarters to the stall. The journal records are given in a chronological order. Given that the ice-cream stall is located at point (0, 0), your task is to print the number of different points that can contain the gang headquarters (that is, the number of different possible locations of the car's origin).

The first line contains a single integer n (1 ≤ n ≤ 2·105) — the number of the car's movements from the headquarters to the stall.

All movements are given in chronological order.

Please do not use the %lld specifier to read or write 64-bit integers in C++. It is preferred to use the cin and cout stream or the %I64d specifier.

Print a single integer — the number of different possible locations of the gang's headquarters.

The figure below shows the nine possible positions of the gang headquarters from the first sample: 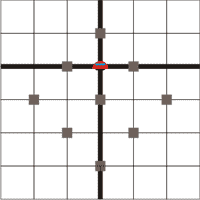 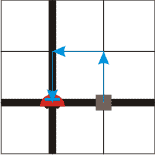