→ Attention
The package for this problem was not updated by the problem writer or Codeforces administration after we've upgraded the judging servers. To adjust the time limit constraint, a solution execution time will be multiplied by 2. For example, if your solution works for 400 ms on judging servers, then the value 800 ms will be displayed and used to determine the verdict.
→ Virtual participation
Virtual contest is a way to take part in past contest, as close as possible to participation on time. It is supported only ICPC mode for virtual contests. If you've seen these problems, a virtual contest is not for you - solve these problems in the archive. If you just want to solve some problem from a contest, a virtual contest is not for you - solve this problem in the archive. Never use someone else's code, read the tutorials or communicate with other person during a virtual contest.
→ Problem tags
geometry
implementation
math
*1700
No tag edit access
→ Contest materials
The problem statement has recently been changed. View the changes.
×

When Valera was playing football on a stadium, it suddenly began to rain. Valera hid in the corridor under the grandstand not to get wet. However, the desire to play was so great that he decided to train his hitting the ball right in this corridor. Valera went back far enough, put the ball and hit it. The ball bounced off the walls, the ceiling and the floor corridor and finally hit the exit door. As the ball was wet, it left a spot on the door. Now Valera wants to know the coordinates for this spot.

We'll say that the ball hit the door when its coordinate y was equal to 0. Thus the coordinates of the spot are point (x0, 0, z0), where 0 ≤ x0 ≤ a, 0 ≤ z0 ≤ b. To hit the ball, Valera steps away from the door at distance m and puts the ball in the center of the corridor at point

See image in notes for clarification.

When the ball collides with the ceiling, the floor or a wall of the corridor, it bounces off in accordance with the laws of reflection (the angle of incidence equals the angle of reflection). In the problem we consider the ideal physical model, so we can assume that there is no air resistance, friction force, or any loss of energy.

The first line contains three space-separated integers a, b, m (1 ≤ a, b, m ≤ 100). The first two integers specify point (a, 0, b), through which the ceiling and one of the corridor walls pass. The third integer is the distance at which Valera went away from the door.

It is guaranteed that the ball hits the door.

Print two real numbers x0, z0 — the x and z coordinates of point (x0, 0, z0), at which the ball hits the exit door. The answer will be considered correct, if its absolute or relative error does not exceed 10  - 6. 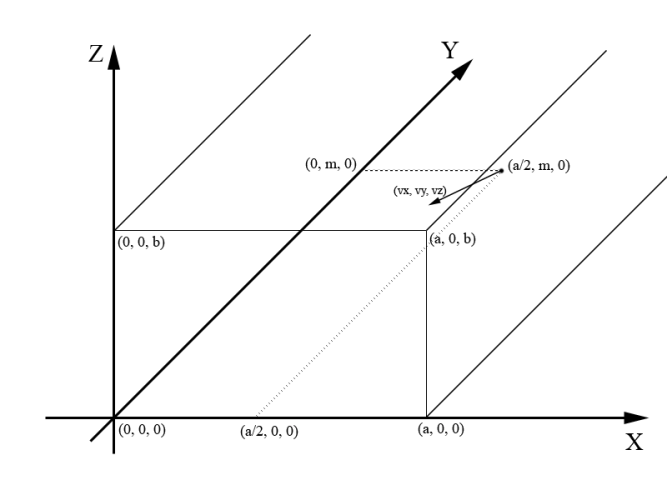