A rooted tree is a non-directed connected graph without any cycles with a distinguished vertex, which is called the tree root. Consider the vertices of a rooted tree, that consists of n vertices, numbered from 1 to n. In this problem the tree root is the vertex number 1.

Let's represent the length of the shortest by the number of edges path in the tree between vertices v and u as d(v, u).

One day Polycarpus came across a rooted tree, consisting of n vertices. The tree wasn't exactly ordinary: it had strings written on its edges. Polycarpus positioned the tree on the plane so as to make all edges lead from top to bottom if you go from the vertex parent to the vertex (see the picture). For any edge that lead from vertex pv to vertex v (1 < v ≤ n), he knows string sv that is written on it. All strings are written on the edges from top to bottom. For example, on the picture s7="ba". The characters in the strings are numbered starting from 0. 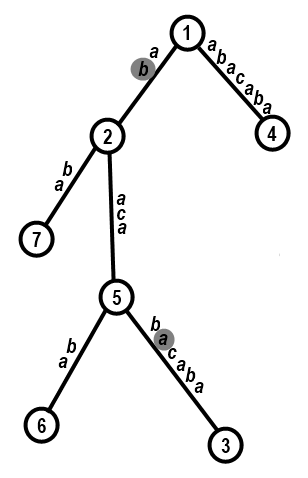 Polycarpus defines the position in this tree as a specific letter on a specific string. The position is written as a pair of integers (v, x) that means that the position is the x-th letter of the string sv (1 < v ≤ n, 0 ≤ x < |sv|), where |sv| is the length of string sv. For example, the highlighted letters are positions (2, 1) and (3, 1).

Polycarpus has a string t, he wants to know the number of pairs of positions that define string t. Note that the way from the first position to the second in the pair must go down everywhere. Help him with this challenging tree-string problem!

It is guaranteed that the input contains at most 3·105 English letters.

Note that the string is not defined by the pair of positions (7, 1) and (5, 0), as the way between them doesn't always go down.