→ Attention
The package for this problem was not updated by the problem writer or Codeforces administration after we've upgraded the judging servers. To adjust the time limit constraint, a solution execution time will be multiplied by 2. For example, if your solution works for 400 ms on judging servers, then the value 800 ms will be displayed and used to determine the verdict.
→ Virtual participation
Virtual contest is a way to take part in past contest, as close as possible to participation on time. It is supported only ICPC mode for virtual contests. If you've seen these problems, a virtual contest is not for you - solve these problems in the archive. If you just want to solve some problem from a contest, a virtual contest is not for you - solve this problem in the archive. Never use someone else's code, read the tutorials or communicate with other person during a virtual contest.
→ Problem tags
constructive algorithms
*2500
No tag edit access
→ Contest materials
The problem statement has recently been changed. View the changes.
×

Important: All possible tests are in the pretest, so you shouldn't hack on this problem. So, if you passed pretests, you will also pass the system test.

You are an adventurer currently journeying inside an evil temple. After defeating a couple of weak monsters, you arrived at a square room consisting of tiles forming an n × n grid, surrounded entirely by walls. At the end of the room lies a door locked with evil magical forces. The following inscriptions are written on the door:

The sound of clashing rocks will awaken the door!

Being a very senior adventurer, you immediately realize what this means. In the room next door lies an infinite number of magical rocks. There are four types of rocks:

To open the door, you first need to place the rocks on some of the tiles (one tile can be occupied by at most one rock). Then, you select a single rock that you have placed and activate it. The activated rock will then move in its direction until it hits another rock or hits the walls of the room (the rock will not move if something already blocks it in its chosen direction). The rock then deactivates. If it hits the walls, or if there have been already 107 events of rock becoming activated, the movements end. Otherwise, the rock that was hit becomes activated and this procedure is repeated.

If a rock moves at least one cell before hitting either the wall or another rock, the hit produces a sound. The door will open once the number of produced sounds is at least x. It is okay for the rocks to continue moving after producing x sounds.

Assume there's an infinite number of rocks of each type in the neighboring room. You know what to do: place the rocks and open the door!

The first line will consists of two integers n and x, denoting the size of the room and the number of sounds required to open the door. There will be exactly three test cases for this problem:

All of these testcases are in pretest.

Output n lines. Each line consists of n characters — the j-th character of the i-th line represents the content of the tile at the i-th row and the j-th column, and should be one of these:

Then, output two integers r and c (1 ≤ r, c ≤ n) on the next line — this means that the rock you activate first is located at the r-th row from above and c-th column from the left. There must be a rock in this cell.

If there are multiple solutions, you may output any of them.

Here's a simulation of the first example, accompanied with the number of sounds produced so far.

In the picture above, the activated rock switches between the '^' rock and the '<' rock. However, no sound is produced since the '^' rock didn't move even a single tile. So, still 4 sound.

At this point, 5 sound are already produced, so this solution is already correct. However, for the sake of example, we will continue simulating what happens.

And the movement stops. In total, it produces 8 sounds. Notice that the last move produced sound.

Here's a simulation of the second example:

Now, the activated stone will switch continuously from one to another without producing a sound until it reaches the 107 limit, after which the movement will cease. 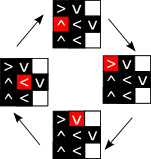 In total, it produced exactly 2 sounds, so the solution is correct.