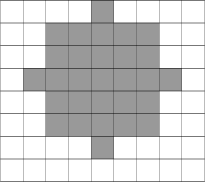 The first line contains three integers n, m and r (2 ≤ n, m ≤ 500, r ≥ 0). Each of the following n lines contains m integers from 1 to 1000 each — the elements of the table. The rows of the table are listed from top to bottom at the elements in the rows are listed from left to right. It is guaranteed that there is at least one circle of radius r, not going beyond the table limits.