Rating changes for last rounds are temporarily rolled back. They will be returned soon. ×
→ Virtual participation
Virtual contest is a way to take part in past contest, as close as possible to participation on time. It is supported only ICPC mode for virtual contests. If you've seen these problems, a virtual contest is not for you - solve these problems in the archive. If you just want to solve some problem from a contest, a virtual contest is not for you - solve this problem in the archive. Never use someone else's code, read the tutorials or communicate with other person during a virtual contest.
→ Problem tags
brute force
dfs and similar
graphs
implementation
*1400
No tag edit access
→ Contest materials
The problem statement has recently been changed. View the changes.
× 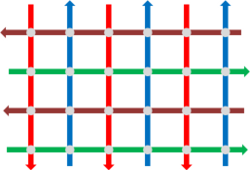 The first line of input contains two integers n and m, (2 ≤ n, m ≤ 20), denoting the number of horizontal streets and the number of vertical streets.

The figure above shows street directions in the second sample test case.