Rating changes for the last round are temporarily rolled back. They will be returned soon. ×
→ Attention
Package for this problem was not updated by the problem writer or Codeforces administration after we’ve upgraded the judging servers. To adjust the time limit constraint, solution execution time will be multiplied by 2. For example, if your solution works for 400 ms on judging servers, then value 800 ms will be displayed and used to determine the verdict.
→ Virtual participation
Virtual contest is a way to take part in past contest, as close as possible to participation on time. It is supported only ICPC mode for virtual contests. If you've seen these problems, a virtual contest is not for you - solve these problems in the archive. If you just want to solve some problem from a contest, a virtual contest is not for you - solve this problem in the archive. Never use someone else's code, read the tutorials or communicate with other person during a virtual contest.
→ Problem tags
geometry
*2000
No tag edit access
→ Contest materials
В условии задачи недавно были сделаны правки. Просмотреть изменения.
×

The Happy Farm 5 creators decided to invent the mechanism of cow grazing. The cows in the game are very slow and they move very slowly, it can even be considered that they stand still. However, carnivores should always be chased off them.

For that a young player Vasya decided to make the shepherd run round the cows along one and the same closed path. It is very important that the cows stayed strictly inside the area limited by the path, as otherwise some cows will sooner or later be eaten. To be absolutely sure in the cows' safety, Vasya wants the path completion time to be minimum.

The new game is launched for different devices, including mobile phones. That's why the developers decided to quit using the arithmetics with the floating decimal point and use only the arithmetics of integers. The cows and the shepherd in the game are represented as points on the plane with integer coordinates. The playing time is modeled by the turns. During every turn the shepherd can either stay where he stands or step in one of eight directions: horizontally, vertically, or diagonally. As the coordinates should always remain integer, then the length of a horizontal and vertical step is equal to 1, and the length of a diagonal step is equal to

. The cows do not move. You have to minimize the number of moves the shepherd needs to run round the whole herd.

The first line contains an integer N which represents the number of cows in the herd (1 ≤ N ≤ 105). Each of the next N lines contains two integers Xi and Yi which represent the coordinates of one cow of (|Xi|, |Yi| ≤ 106). Several cows can stand on one point.

Print the single number — the minimum number of moves in the sought path. 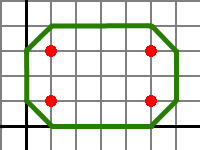