Rating changes for last rounds are temporarily rolled back. They will be returned soon. ×
→ Virtual participation
Virtual contest is a way to take part in past contest, as close as possible to participation on time. It is supported only ICPC mode for virtual contests. If you've seen these problems, a virtual contest is not for you - solve these problems in the archive. If you just want to solve some problem from a contest, a virtual contest is not for you - solve this problem in the archive. Never use someone else's code, read the tutorials or communicate with other person during a virtual contest.
→ Problem tags
constructive algorithms
math
*2200
No tag edit access
→ Contest materials
The problem statement has recently been changed. View the changes.
×

Every day Ruslan tried to count sheep to fall asleep, but this didn't help. Now he has found a more interesting thing to do. First, he thinks of some set of circles on a plane, and then tries to choose a beautiful set of points, such that there is at least one point from the set inside or on the border of each of the imagined circles.

Yesterday Ruslan tried to solve this problem for the case when the set of points is considered beautiful if it is given as (xt = f(t), yt = g(t)), where argument t takes all integer values from 0 to 50. Moreover, f(t) and g(t) should be correct functions.

Assume that w(t) and h(t) are some correct functions, and c is an integer ranging from 0 to 50. The function s(t) is correct if it's obtained by one of the following rules:

Yesterday Ruslan thought on and on, but he could not cope with the task. Now he asks you to write a program that computes the appropriate f(t) and g(t) for any set of at most 50 circles.

Ruslan can't keep big numbers in his memory, so you should choose f(t) and g(t), such that for all integer t from 0 to 50 value of f(t) and g(t) and all the intermediate calculations won't exceed 109 by their absolute value. 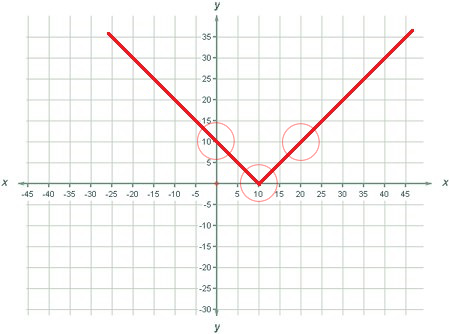 The picture shows one of the possible solutions
User lists