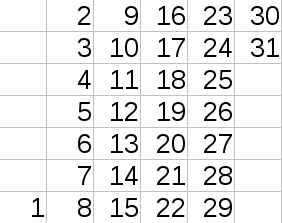 Petr wants to know how many columns his table should have given the month and the weekday of the first date of that month? Assume that the year is non-leap.

Print single integer: the number of columns the table should have.

The first example corresponds to the January 2017 shown on the picture in the statements.

In the second example 1-st January is Monday, so the whole month fits into 5 columns.

In the third example 1-st November is Saturday and 5 columns is enough.