Have you ever tasted Martian food? Well, you should.

Their signature dish is served on a completely black plate with the radius of R, flat as a pancake.

Further, the first portion (of the same perfectly round shape) of Green Bull Terrier is put on the plate. It should come in contact with Honduras and Guadeloupe, should not go beyond the border of the plate and should have maximum radius.

To determine whether a stranger is worthy to touch the food, the Martians ask him to find the radius of the k-th portion of the Green Bull Terrier knowing the radii of a plate and a portion of the Golden Honduras. And are you worthy?

Print t lines — the radius of the k-th portion of the Green Bull Terrier for each test. The absolute or relative error of the answer should not exceed 10 - 6. 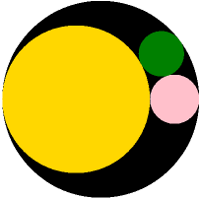 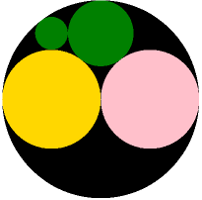