At regular competition Vladik and Valera won a and b candies respectively. Vladik offered 1 his candy to Valera. After that Valera gave Vladik 2 his candies, so that no one thought that he was less generous. Vladik for same reason gave 3 candies to Valera in next turn.

More formally, the guys take turns giving each other one candy more than they received in the previous turn.

Single line of input data contains two space-separated integers a, b (1 ≤ a, b ≤ 109) — number of Vladik and Valera candies respectively.

Pring a single line "Vladik’’ in case, if Vladik first who can’t give right amount of candy, or "Valera’’ otherwise. 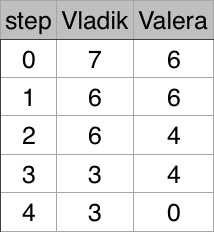