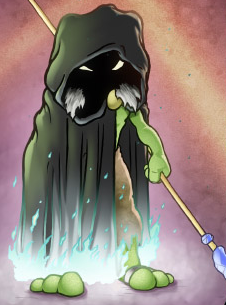 Senor Vorpal Kickass'o invented an innovative method to encrypt integer sequences of length n. To encrypt a sequence, one has to choose a secret sequence

Vorpal is very selective, so the key should be such a sequence bi, that its cyclic shifts are linearly independent, that is, there is no non-zero set of coefficients x0, x1, ..., xn - 1, such that

for all k at the same time.

After that for a sequence

you should build the following cipher:

In other words, you are to compute the quadratic deviation between each cyclic shift of bi and the sequence ai. The resulting sequence is the Kickass's cipher. The cipher is in development right now and Vorpal wants to decipher a sequence after it has been encrypted. You are to solve this problem for him. You are given sequences ci and bi. You are to find all suitable sequences ai.

It is guaranteed that all cyclic shifts of sequence bi are linearly independent.

In the first line print a single integer k — the number of sequences ai, such that after encrypting them with key bi you get the sequence ci.

After that in each of k next lines print n integers a0, a1, ..., an - 1. Print the sequences in lexicographical order.

Note that k could be equal to 0.