According to Wikipedia, "The ACM is a non-profit professional membership group", but that's entirely different when it comes to ACPC (AKA Arab Collegiate Programming Contest) where the contest has been consecutively held in Egypt in Sharm El Sheikh since 2013, that's usually not an issue for the participating teams when it comes to the organization of the contest, but if we look at the costs for each participating team, official teams from the same university have to pay 1500$ to be able to register in ACPC which includes a mandatory 5* hotel, and unofficial teams have to pay 3000$, we can all agree that both official and non-official teams cost way too much, not to mention the flights for teams that come from outside of Egypt and all the costs that follow the traveling process.

To even make things worse this year, now the third team (from the same university) has to pay 3000$ whether it was officially qualified or the team was participating unofficially which obviously shows how ACPC organizers in Egypt are exploiting the contest to fill up someone's pockets.

This thing has caused problems before, some teams in earlier years tried registering but by staying in an outside hotel, the team was disqualified for that, other teams had to raise funds online or by other means for them to be able to participate in the contest. Here are some older blogs talking about the same issue: Blog #1 , Blog #2

I'm even writing this blog from a fake account so my team doesn't get disqualified for no good reason :)

ICPC organizers must take actions to stop this absurd blackmailing for Arab teams. 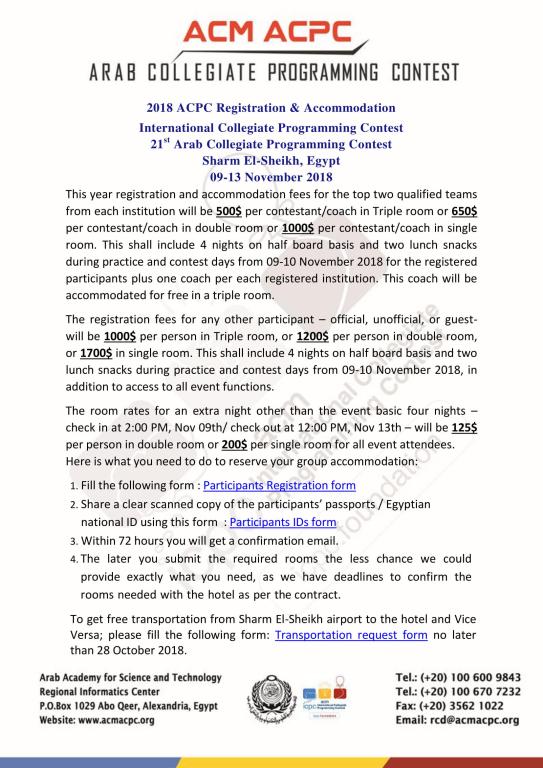