[Tutorial] Euler's phi function, its properties, and how to compute it

By kamilszymczak1, history, 5 months ago,

In one of the recent contests there appeared a problem which involved Euler's phi function, and I figured I could write a bit about this function here.

First, I will briefly introduce Euler's phi function, talk about two of its properties, and give you proofs of both of them. Ultimately, it will lead us to a way to compute the value of this function for some given integer n with reasonable time complexity.

I tried to keep this post quite basic, so that it's accessible to everyone. Therefore, if you are already quite good at some topic mentioned here, feel free to skip a section or two.

Also, I would like to say thank you to my friend, sysia, who helped me a lot with writing this post and suppressed my tendency to write too much.

What is Euler's phi function?

The properties of Euler's phi function

Euler's phi function has numerous interesting properties, and if you are looking for the whole list, I suggest that you consult wikipedia. For competitive programming, however, two of them are particularly important.

1. Value of phi for an integer power of a prime number

2. Multiplicativity under the condition that both arguments are coprime

This property is a bit trickier to prove and the next two sections are devoted to its proof.

Chinese Remainder Theorem is a well-known topic in competitive programming. Therefore, I would like to keep this section relatively short and not go too much into details. If you want the proof or simply would like to learn more about it, you can visit this page. 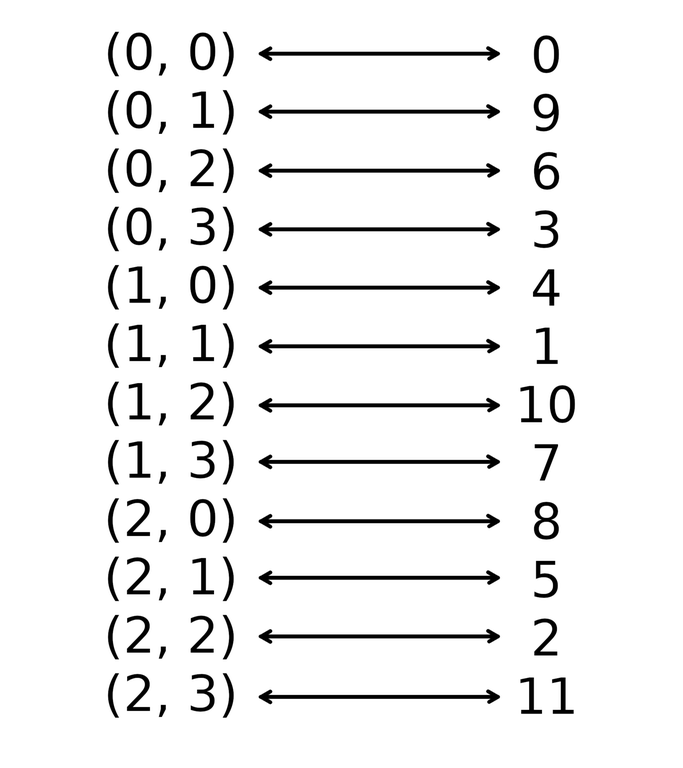 Now that we have learnt about CRT, we can finally prove the second property of our function. To do so, let's prove the following lemma.

We can rephrase this lemma with two statements:

A proof of the first statement

A proof of the second statement

Let's have a look at the example below. It's the picture from the previous section, but this time I marked certain pairs and numbers with a nice greenish colour. The numbers marked are those which are coprime to 12, and the pairs marked are those pairs $$$(a_1, a_2)$$$ that satisfy the property that $$$a_1$$$ is coprime to 3 and $$$a_2$$$ is coprime to 4. What our lemma says is that the marked numbers correspond to the marked pairs and vice versa. 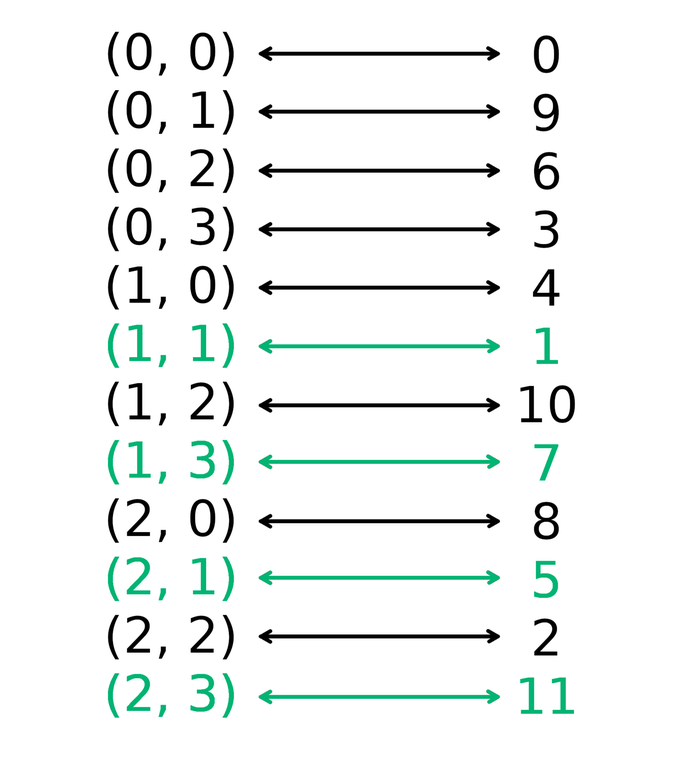 Alternatively, we can use a bit more math notation and say the following.

We define B and C in a similar manner

If you don't immediately see that the two formulas above are the same, you can take time to convince yourself that it is indeed true. It's quite understandable why the latter is usually given. It's quite a beautiful formula in fact. Mathematics at its finest. I personally prefer to look at it this way (and sysia does so too).

The bottleneck here is the time complexity of factorisation. We could just use a simple $$$O(\sqrt{n})$$$ algorithm or, if you want to deal with really large numbers, you can get more fancy and use Pollard's rho algorithm, which should work in $$$O(n ^ {\frac{1}{4}})$$$ (this time complexity analysis is heuristic, but the algorithm is quite fast in practice).

To my astonishment (and probably yours too) we can compute prefix sums of the $$$\phi$$$ function in $$$O(n^{\frac{2}{3}})$$$ time(!). It is usually referred to as the Xudyh sieve or Mertens Trick. More details are given here. Many thanks to chromate00 for mentioning it in the comments.

Here is a couple of practice problems. If you know any problems related to this topic that are not mentioned here, you can mention them in the comments.

That's the end of this post. I hope you benefited from it and, most importantly, liked it. Also, it's my first post here, so any suggestions from you will be appreciated. Lastly, if you know some more interesting properties of Euler's totient function that may come in handy in competitive programming, you can consider sharing them with us in the comments.

Have a good day there!