Sometimes it's not their fault.

It's 2023 now, and everyone is happy and hoping for a good year, which many good contests to come. So I want to say about one thing that I saw in most of the contests from last year, which I was pretty much annoyed about it and decided to speak about so that this year we will hope to have a better experience doing contests here.

I have been in this community for more than 3 years now, not very long, but definitely enough to say that although the number of participants did increase, the number of users increase dramatically, but the number of people that respond to the contests positively don't. It actually did decrease though. I still remember that 500+ upvotes for a contest announcement are a normal thing back then, but I rarely see them now. And a common thing right now, every single contest that is over will have some comments criticizing it, but not in a good way at all. So I will make this quick for certain types of comments like that.

I don't know if you do but I do see a lot of things like "This contest is complete bullsh*t", "Sh*t author" or similar. Or worse than that. Or even in different languages. Well, yes, most probably you did badly in that contest, and/or it's unbalanced or too hard, so you criticize the problem-setter for doing that badly. Seems understandable.

Or something like, "D is just boring implementation", "B is harder than C", or "E is just cancer. How the hell did you guys come to problems like this". Yeah right, problems are sometimes too nasty or not really your type, or it's just too unbalanced or something. Seems understandable.

And of course, the classic "X-Forces" stuff. MathForces, PermutationForces, Speedforces,... something like that. It's the most common one at least to my knowledge, and let's be honest, considering the number of upvotes in each of them, you can tell many coders agrees with this kind of thing like it has become a common thing in contests lately. Seems understandable.

All of the criticisms, all of the hate on the problem setters, are a lot more than I thought. It seems reasonable if you think that contest is bad for you and it's irrelevant in some way.

But how will the problem setters, or others feel, are very different.

I asked thanhchauns2, a real Codeforces problem setter who set 2 contests here recently and received a lot of positive feedback about it. I enjoyed both of them as well. 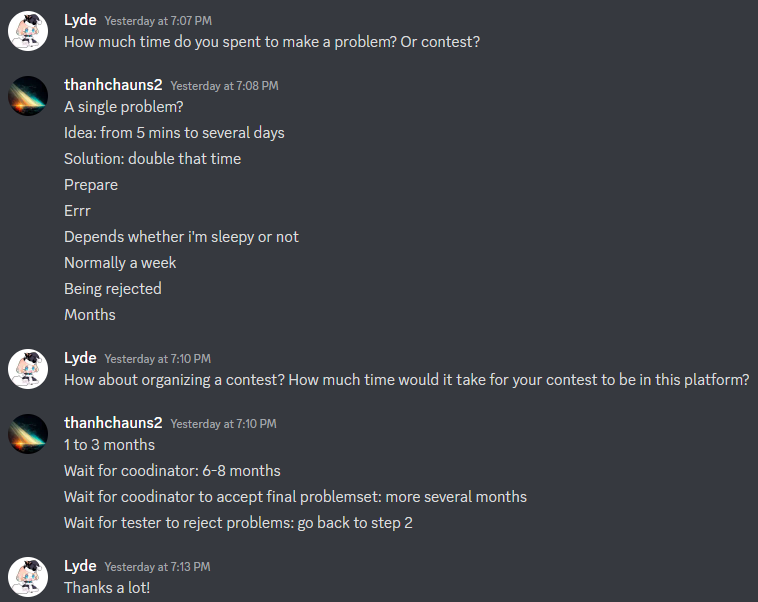 Or in short, he will spend a hell amount of time on problems and contests. Yes, thinking of an idea for a Codeforces problem, or any problem that would be in an important contest isn't easy. At all. Right now, the pressure is even bigger, the expectations are higher, hence a problem you solve here, recently, or generally, would likely take days, weeks, or even months, to even come out with a raw idea. It's not as easy as a lot of people think.

So sure, I don't say that you shouldn't leave negative feedback to the problem setters and their problems, maybe they didn't prepare it that carefully, it's a very important aspect for them to come back stronger with higher quality problems.

But always remember, if you do badly in a contest because of the above reasons, sometimes it's not their fault. It's you having a bad day.

An unbalanced contest, a "Mathforces" contest, or something similar, are still, contests. It might be unfamiliar to you, and it might make you frustrated, but every single one else does that contest as well. If you have a bad rank, everyone else above you, or you have many WAs, then no, it's not the author's fault. Then you have negative deltas, you are sad because you can't reach the level you want to. But think twice before blaming the problems. It is unfamiliar? Learn it yourself. It is math? Learn it. Practice some problems, until it becomes familiar. Because that day, they solved it, you don't. Simple as that, learn from mistakes and come back stronger, it will become beneficial for both authors, and you.

About unbalanced contests? Yeah, it's annoying, but get familiar with it. There are no rules here, that force the problems to be in a fixed range, to be acceptable. It's just a common sense building over the years, and sometimes, mistakes do happen, but that's how strategy comes to play. Most of the coders here solve problems in order, but sometimes, in a contest, if you don't have any hope for a problem, you could read the next one, nothing wrong with that, and it can save you. There aren't 1000 testers per contest to tell you what is more difficult than what. In the end, the same problem, they solved it, you don't.

And yeah, don't curse in a different language. Please. It is just wrong in every way.

So what do we get? Before leaving a comment about something, be the author. Be the one that will hear your screams. Be the author that will get the hate, for a whole f*cking year of making their dream of making a contest, just for you saying it's bad. Get over it. A problem is a problem, is for you to solve, not to hate. In the end, you will learn, and you will become stronger after each contest. And the authors will get the credit they deserved, and be ready, to make much more, and much better contests for you guys.

And I know, there are still bad contests in general. There are even copy-pasted problems, which I hope will never happen again. But from these lessons, I know they will know what they did wrong after each contest, and they, the problem setters, the authors, and the coordinators will improve themselves to bring to you a better experience with Codeforces contests, to make this platform better. And do me a favor. So should you. Sticks and stones may break your bones, but words can break your heart. And it can shatter your dreams.

Any opinions drop them below. Apologize for any mistakes.