Get ready for some action as participants are ready to battle for Grand Prize of 300000 russian roubles and coveted title of Yandex.Algorithm champion

If you have any questions about the competition feel free to ask. Competition starts at 11:30 CET, about an hour from now. Currently participants set up their PCs

-0:33 — We have quite tough field this year including ACM ICPC World Champions, TCO, GCJ and IOI winners. snarknews had provided some info on finalists here

-0:05 — Currently contest area is filled with several journalists and cameramen

0:16 — there are several submits on D, some blind and some open. and 1 submit on both B and E, blind

0:24 — marek.cygan is first one to submit 2 problems and currently in the lead

0:26 — Problem A is a tricky one — sometimes you need to add something for stack before removing 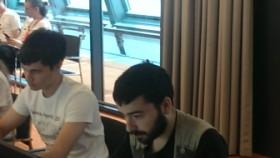 0:32 — During test run I solved A, B and D during the contest and C a couple of minutes later, though I have seen A and B before

0:33 — Currently marek.cygan, pperm, s-quark and LayCurse are in lead with 2, while usual favorites have only one problem under their belt

0:36 — Some more subbmits, most of participants with 2 solved D and either B or E, though there are also one blind submission on A

0:42 — Merkurev may spend a lot of time on A as currently he have the mistake I mentioned. To his defence authors originaly made the very same mistake

0:44 — A lot of photos made by some professionals

0:46 — Contest almost reached its equator, and we have out first participant with 3 problems — s-quark. He solved all the usual suspects — B, D and E

0:50 — vepifanov joined him, though remeber — as Yandex empoyee he participates out of competition

1:00 — Both Petr and tourist are now in group of people who solved 3

1:01 — eatmore is actually quite close to solve A — he only needs to understand that sometimes it is good to make 2048

1:04 — SirShokoladina has most chances to be first to solve 4 as he still have B to submit. Also Eryx is the first one to solve C, he uses all open tactics and guaranteed to has at least 3 problems

1:08 — And first submit from GCJ and TCO champion rng_58 — correct solution on F. We now have at least blind submits on all problems

1:16 — As evident from the posted image Petr works on C

1:22 — Though one of them participates out of competition, so no

1:35 — Both Petr and tourist trying to solve A in time

We have out final results. Congratulations for Gennady Korotkevich for winning it all!