The flight to Florida was short (well, short compared to the flight to Las Vegas) and nice (a lot of movies to see and ice-cream). But most of my joy dissolved into nothing in Miami airport, when I didn't find the promised taxi. In the end my drive to the hotel took 1.5 hours and a hundred dollars more than I expected it to. Oh well.

The hotel was beautiful, especially the palm trees right in the lobby and the orchids. 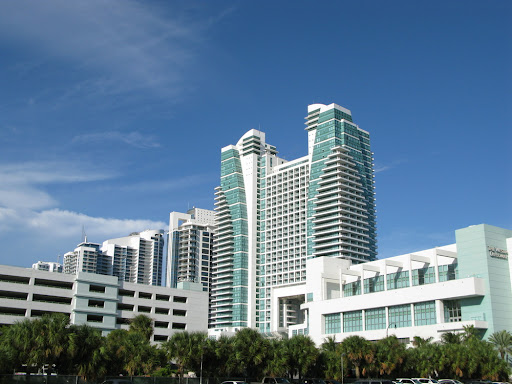 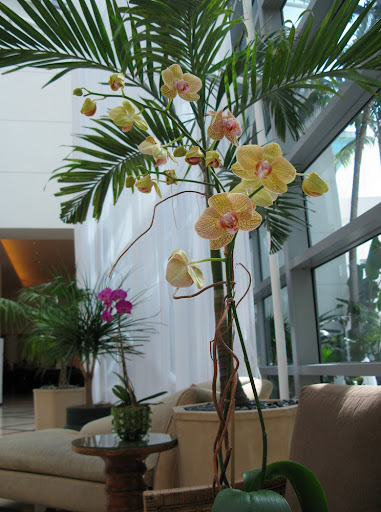 Besides, it was much smaller than The Mirage; and the size becomes quite important whenever you want to escape Arena between the competitions to go outside and photo-shoot a couple of birds. The receptionist optimistically described my room as "facing the ocean", but actually it faced the hotel's conference-hall roof. The noise of air conditioners (or whatever emits this noise on the roof) prohibited staying on the balcony for over five minutes straight. Yet on the left of the roof there was the ocean, on the right one could see the city and the nearby channels, and what else does a person need on their balcony? 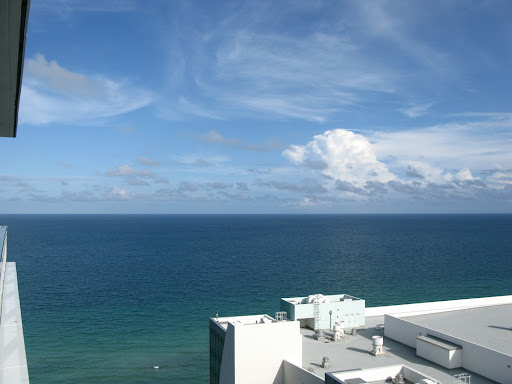 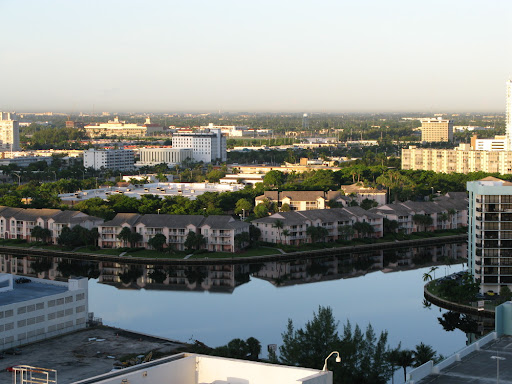 If I really meant that, I could have had a walk in the hotel's neighborhood, but once I went out, I dove into the infamous raining season - it was cloudy, hot, humid and stuffy, and it felt like suffocating on the spot. So I found the wi-fi in the lobby and went to sleep early. However, the weather improved every day (or I started to adapt to it, but each day it was easier to spend time outside of air-conditioned areas).

Day 0. The presents, my precious!


Being an orderly blogger (and a pretty hungry one as well), I went looking for the War Room first thing in the morning: to say hi to the admins and to check the breakfast. I found both the admins and the breakfast easily, had a look at a fancy coffee machine which could also brew tea, and then Jessie asked whether I had some time to spare organizing the Arena. The question was put in a way I couldn't say "no" to, and so I spent most of the day helping out - unpacking signs and sorting out the papers and the gifts for the finalists into TCO11 bags. Guys, if any of you got a lopsided globe stress-ball instead of a stylish black one or vice versa, I'm afraid it's my fault, unless it's not lmmortal's - he joined me next day to finish packing. 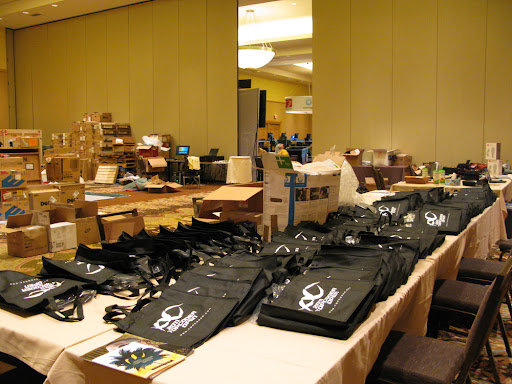 Sometimes I took a break from community service to jog around the Arena, feast my eyes on the mess and take a photo or two. Once I went out on the tempting balcony in the background of the War Room which faced the street. I admired the view, took a photo for the blog and was ready to get back inside, when I found out that the door I used was locked. It took me only a minute to check two other doors (the last one opened), but in this minute a lot of thoughts visited me, mostly self-deprecating: the balcony is in the background and far from the typical admins' routes... Since that time I never went outside without a company to stay inside and ensure I could return whenever I wanted to. By the way, a lot of doors in the hotel can always be opened from the inside, even when locked, but not from outside. When people started to lock doors to the Arena and the War room next day, one could often hear some admin isolated outside and banging on the door to get back inside.

As evening grew closer, I started to realize that arriving to Florida early to spend all this time in the Arena accompanied by some bags is a pretty weird idea. So at dinner-time VolodymyrK and I escaped and set off to explore the neighborhood.

To tell you the truth, we didn't really succeed at this. Hollywood is certainly not Las Vegas to have places of interest right at the hotel entrance or even inside of the hotel. Moreover, most official announcements mentioned Fort Lauderdale, but it's close to Hollywood only on the maps; in reality there's quite a walk between the two of them. The public transport exists only in theory - in practice it stops working around 7 p.m., and I don't think I ever went out that early. I've seen the local bus only once, afar off, on my ride back to the airport :-) Therefore, of all the places listed so enticingly at this page we've visited only Hollywood Beach Broadwalk. It is pretty much a common esplanade, with shops and coffee shops alongside; it has a cycleway, a beach theater and several small parks, one with a fountain. Don't think we've found anything particularly interesting at the Broadwalk, except for maybe a closed shop with a gawker-alarm: it started to ring not when we entered it but when we were going to exit without having bought anything. Anyways, nobody reacted to it so I'm not sure I haven't mistaken it for something else. I'm a pretty poor camerist, especially in the twilight, so I'll let myself borrow a photo from the official Broadwalk's site:

But anyways it was interesting outside. One can touch, smell and lick the ocean (I dared to have a swim and found a company for it much later than the day 0). One can go for a photo-hunt for the local wildlife. I got quite a collection of shots, though it took some time: black, brown and beige birds, tiny lizards and frogs (I'm especially proud of this frog photo, since it jumps much, much better than I do). The black birds felt positively flattered by my attention: they preened their feathers, cast me dignified glances, and one even sang for me. 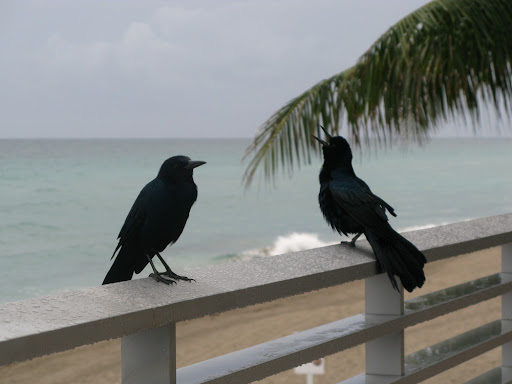 I've also noticed some more modest creatures which flew for their lives whenever a paparazzi was approaching. One of them was a small crab which I nearly treaded down; at first it pretended to be dead, but at the sight of the camera changed his mind and rushed into the bush, leaving behind my excited scream.
One could also play with a wonderful optical effect in the photos made at high humidity: the lens sweats immediately, and the picture gets mantled in a romantic mist. 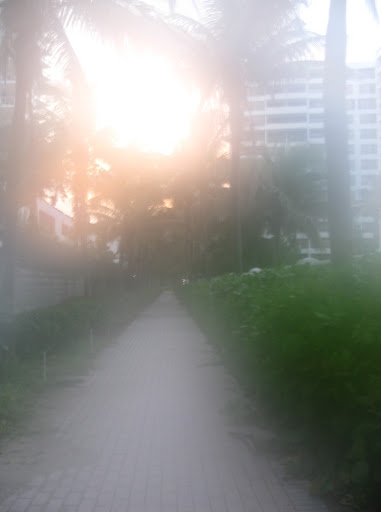 As I was drifting off that evening, my view of the future was optimistic: I've almost finished sorting out things in the bags, the ocean was beyond expectations, and the weather allowed to stay outside of air-conditioned rooms. The life was starting to turn around! To tell you the truth, around midnight my optimism was slightly shaken by the arrival of my roommate, 7ania7. See, in Vegas I had the whole room at my command, so sharing it with someone else became a surprise. I was already fast asleep when she burst into the room with all the energy of the reckless youth and shouted "Hi, I will be your roommate!". Thrice. See, when I'm asleep, I'm not much of a talker even in Russian...


On the next morning I went back to my bags. The War Room looked somewhat more hurried. The Arena which looked almost tidy yesterday was a mess once more the Intel booth was being unpacked and constructed. Two more bloggers arrived, and everybody was looking for invisiblepilot, from time to time recalling that she was, you know, invisible, and trying to make everybody silent and listen. Rustyoldman was approaching lmmortal with a fork; lmmortal was keeping away and explaining that the first letter is L instead of i, and all these experiments would end up in Rustyoldman doing the blog about Mod Dash as well, so he better not do it!

Around 1 p.m. Jessie's megaphone summoned all admins; there was a short speech, and everybody drank up to the start of TCO. I'm a teetotaler, so I got hold of my camera. Jessie approved me taking the photos, but an hour after they made their way to the blog, she called a bloggers' meeting and totally prohibited publishing any photos of drunk admins. Oh well, I've never seen one, anyways :-)

After this the day crept into the evening, and finalists registration - into Welcome Reception. I was hungry again (the lunch that day was pizza, and it's not my favorite kind of food), so I never took out my camera at the Reception, but I didn't really need to - there where enough photos taken even without me (see, for example, the official ones). Last year I've slept through the Welcome Reception, but evidently I haven't missed anything important, except for some talk with the finalists. The one course I remember was mashed potatoes, mostly because it was present in three colors: plain, orange and violet. I dared to taste all three, but kept faith to the traditional recipe - not least of all due to sarcastic commentary the colored versions received from my company.

And this was the end of Sunday; next day the rounds were to start...

To be continued; all photos not present in the article are given here.