Educational Codeforces Round 39 [Rated for Div.2] 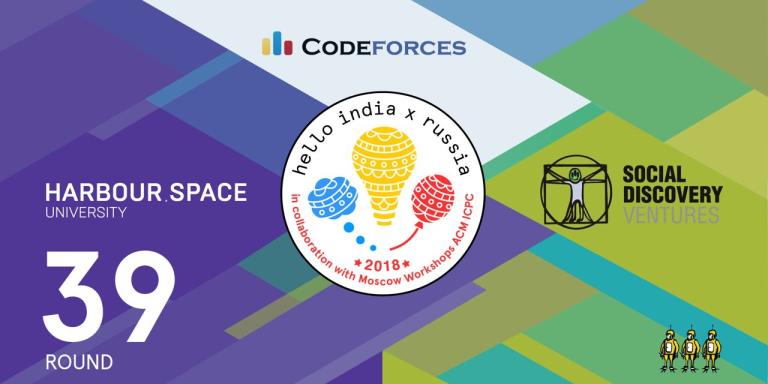 This is a special Educational Round — Top three contestants among those who are eligible for participating in ACM ICPC will be invited to attend the Hello India x Russia Programming boot camp under the Codeforces + SDV banners, on a full team sponsorship.

Social Discovery Ventures (SDV) creates, develops and funds Internet projects specialising in communication platforms that enable people across the world to get closer and expand their social networks.

The winners will be fully sponsored with their boot camp participation fees, accomodation, and meals for the India location!

This round also has a special regional prize — the company Phaze Ventures, a platform founded to transform the region by unlocking the untapped potential of our youth, startups and corporates, will be sponsoring the top 3 participants of this round from Oman (also among those who are eligible for ACM ICPC) — further sharing the importance of supporting talented programmers and sending them to these types of events throughout the world.

The round will be rated for Div. 2. It will be held on extented ACM ICPC rules. After the end of the contest you will have one day to hack any solution you want. You will have access to copy any solution and test it locally.

You will be given 7 problems and 2 hours to solve them. Problem authors are awoo, vovuh and me.

Good luck to the participants! Hope you will enjoy the contest.

UPD: The tutorial has been published.

Announcement of Educational Codeforces Round 39 (Rated for Div. 2)