The Fear of Gaussian Elimination

By godmar, history, 3 years ago,

Recently, I was asked to help flesh out a problem for the NAIPC 2019 contest whose problems are also used every year as the "Grand Prix of America." Although I didn't create or invent the problem, I helped write a solution and created some of the test data for Problem C, Cost Of Living.

From the problem setter's perspective, this was intended to be an easy, A-level problem: suppose you have a table of values ay, c that meet the condition that:

Most contestants immediately realized that above product can be written as a linear combination/sum by taking the logarithm on both sides:

Each given value thus represents a linear equation in unknowns

Each query, in turn, can also be written as a linear equation by introducing a variable

Now, all that is left is to solve for the query variables using a traditional method (Gaussian Elimination with partial pivoting) and report the results — or so we thought.

While top teams disposed of this problem quickly, there was a great deal of uncertainty among some contestants whether this approach would work. One team attempted to solve the problem with a homegrown variant of Gaussian elimination, but got WA because their answer was too far off the requested answer (the answer had to be given with 1e-4 rel tolerance in this problem).

When they downloaded the judge data generator scripts, they observed that the amount of error in their implementation changed when they printed the input data with higher precision, which was very confusing to them.

For this problem, the input data was not given with full precision because it involves products with up to 20 factors. For instance, if bc = mc = ik = 1.1 than a10, c = 6.72749994932560009201 (exactly) but the input data would be rounded to 6.7274999493. If they changed this and printed instead 6.72749994932561090621 (which is what is computed when double precision floating point is used), their solution would be much closer to the expected answer. Their result became even better when they used a floating point number type that uses more bits internally, such as quad-precision floats or java.math.BigDecimal. Thus, they concluded, they were doomed to begin with because the input data was "broken".

The answer lies in a property of numerical algorithm called stability. Stability means that an algorithm does not magnify errors (approximations) in the input data; instead, the error in the output is dampened and can be bounded by some factor. The illustration below shows a simplified example: 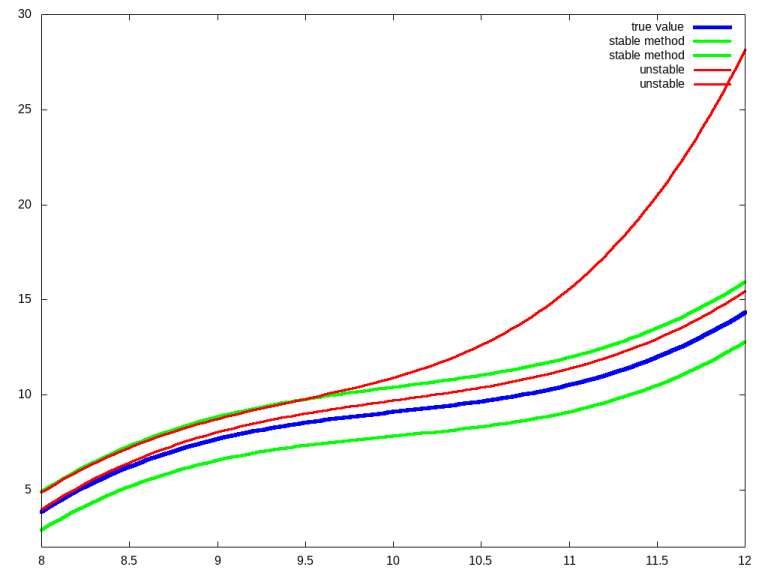 A stable algorithm will produce a bounded error even when starting with approximated input, whereas an unstable method will produce a small output error only for very small input errors.

The particular homegrown variant of Gaussian elimination they had attempted to implement avoided division on the left-hand side, keeping all coefficients in integers, which meant that the coefficients could grow large. On the right hand side, this led to an explosive growth in cancellation which increased the relative error in the input manifold — in some cases, so large that transformation back via exp produced values outside of what can be represented with double precision (i.e., positive infinity). It was particularly perplexing to them because they had used integers intentionally in an attempt to produce a better and more accurate solution.

Naturally, the question then arose: how could the problem setters be confident that the problem they posed could be solved with standard methods in a numerically stable fashion?

In short, there was a great deal of fear and uncertainty, even among otherwise experienced contestants (based on the CF ratings).

Here are a few facts regarding Gaussian elimination with partial pivoting contestants should know:

What does this mean for programming contests?

Overall, this graphic sums it up: when faced with a linear system of equations, you should 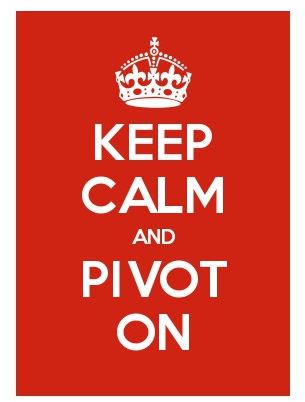