New Code Jam interface: a step back in usability

By RussiaMustDie, history, 4 years ago,

Hi all! This year, Google has again decided to change Code Jam user interface. The new interface has already been used for Code Jam to I/O for Women and Kick Start rounds, and from what I saw, it is even worse than the last year. Let's start. 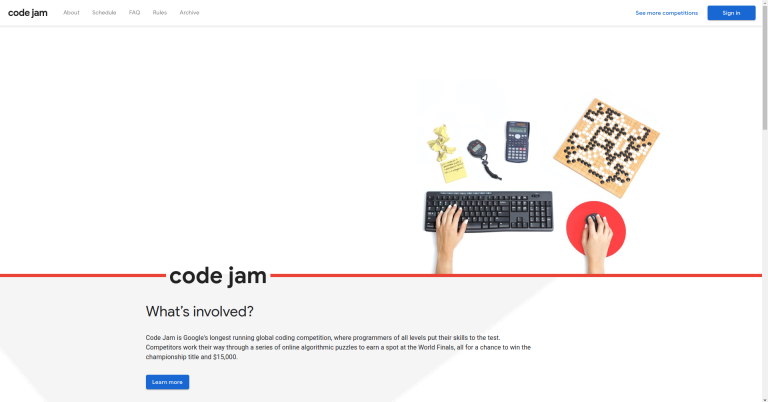 This is what I saw when I opened Code Jam main page. This year it uses even longer domain name, codingcompetitions.withgoogle.com, and some text seems to be missing. After some investigation, I found that this occurs when a browser is configured to block third-party cookies. I configure my browser this way because I don't want some companies to track me around, and for nearly all sites, this causes no issues. On some sites, blocking third-party cookies causes single sign-on to stop working, but this is understandable. Code Jam website is the first one that I saw such that blocking third-party cookies breaks it so much that you can't even read text (note: looks like this have been fixed, and now the website displays a warning instead).

After getting the text to appear, I struggled with some login problems and finally got to the competition interface (this screenshot was taken after the round, but it looked almost like that during the competition as well): 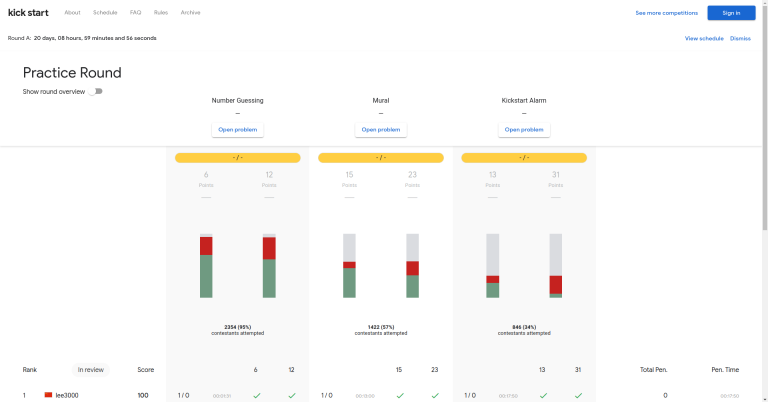 Usually, when you enter a round, you expect to see the problems. This year, you start a round with a scoreboard. To get to the problems, you need to click one of the "Open problem" buttons. Doesn't matter which one: you would be able to switch between problems from the dashboard. Here it is: 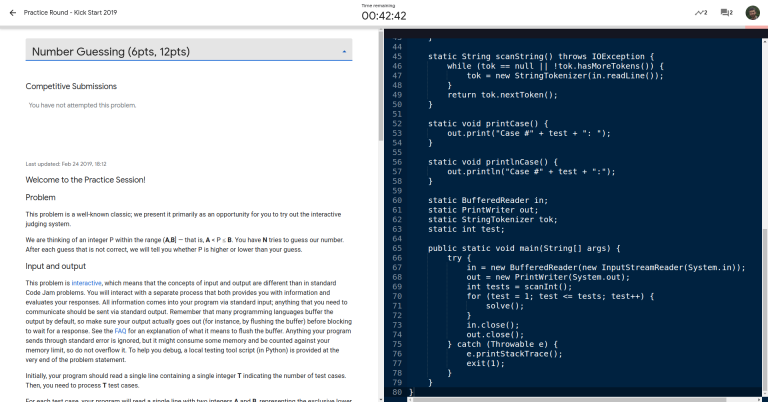 As you see, in this new version there is a code editor that always takes half of your screen space. No way to resize or hide it. Doesn't matter if you want to use it or not. I, for instance, prefer to use a real IDE, because it has syntax highlighting and completion and refactoring and I can run the code locally and IT DOESN'T FORCE ME TO USE WHITE TEXT ON BLUE BACKGROUND. Also, in the old interface, there was a side bar for switching between problems, and in the older version it also showed submission statistics and the number of new announcements, but now this is all gone.

Side note: suppose that you just want to read the problems, and all you got is a tablet. 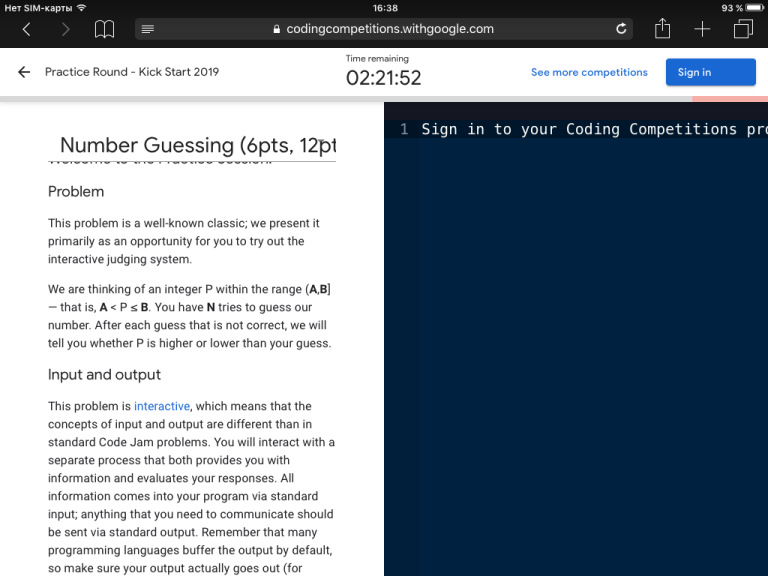 Sorry, the editor, despite being completely useless, still wastes half of your screen space. Also, looks like the problem name doesn't fit into the provided space.

Back to the previous screen.

Do you see a submit button? Me neither. It took quite some time for me to realize that to be able to submit your solutions, you have to register TWICE: once to enter your information into the new website, and once more to actually register for the competition. Otherwise, you can type the code, but the panel with submit button (and a couple of other buttons) is hidden. After I registered properly, the panel appeared (but my code disappeared, fortunately, I had it saved to a file). Then I could finally submit it.

Now, back to the scoreboard. 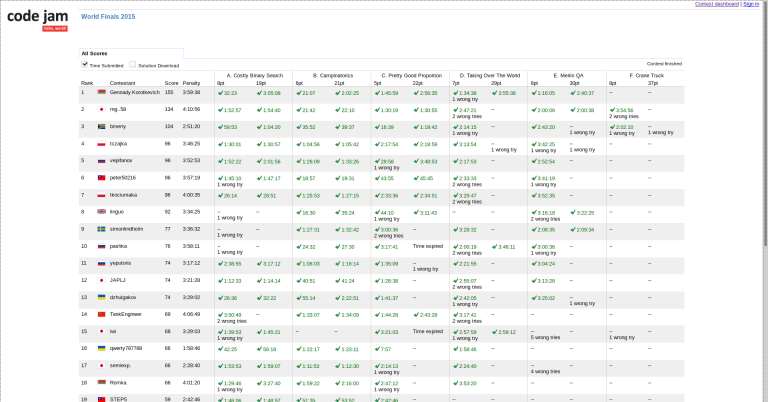 The old version easily fits six problems, and has space for one or two more. And even the font size is almost the same! Now, on top of the scoreboard, there are some big useless graphs. To see the actual scoreboard, you have to scroll down. For comparison, the old interface displays submission statistics below the scoreboard, as an additional row. Codeforces is doing the same.

Another change is the number of rows you can see on a single scoreboard page. On Codeforces, you can see up to 200 rows at once, which is reasonable for a round with several thousands of participants, and works for smaller rounds as well. In the old Code Jam interface, it was possible to see 30 rows at once. Now, there is a selector that switches between 10 and 20, and it doesn't even work until you switch between pages (looks like this had been fixed recently).

Here is another example of a well designed scoreboard: 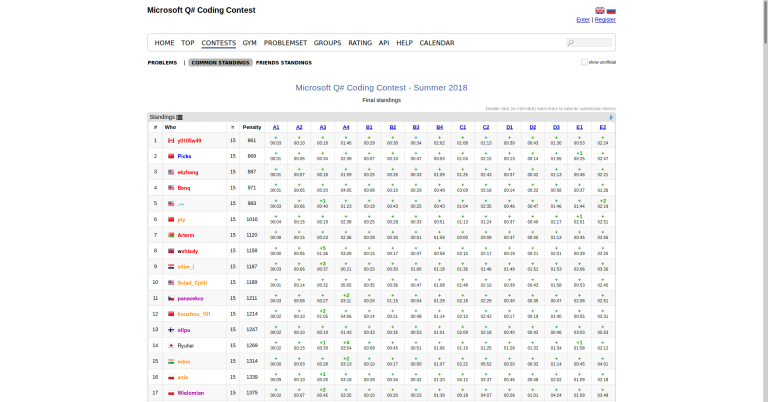 Also, as I scroll the scoreboard, I have about 40% of my screen covered by the heading which doesn't scroll, which is way too much.

Now about round overview and problem analysis. Instead of being in a single convenient place, this information is now sprinkled around the interface. To see the overview, you need to click a slider on top of the scoreboard, and the overview will appear in place of those big useless graphs. To see the analysis, go to a problem and click an analysis "tab" above the text. Again, I like the old version so much more.

All in all, the new interface is worse than the old one in nearly every respect. So, what can be done to make it better? Here are some suggestions: