By brunomont, history, 2 years ago,

This blog is heavily inspired by TLE's blog using merging segment tree to solve problems about sorted list. I don't know exactly how well known this data structure is, but I thought it would be nice to share it anyway, along with some more operations that are possible with it.

What it can do

We want a data structure that we can think of a set/multiset of non-negative integers, or even as a sorted array. We want to support all of the following operations:

We are going to use a dynamic segment tree to represent the elements. Think of each of them as an index, a leaf on a segment tree. We want the segment tree do be dynamic (we only create the nodes when we need them). 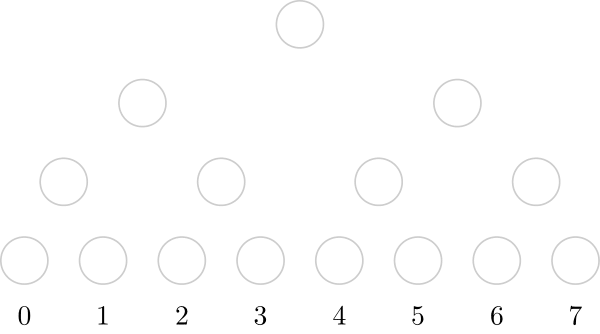 If we insert the value $$$2$$$, we need to create the path from the root to the leaf that represents $$$2$$$. It is also useful to store, on each node, the number of created leafs on that node's subtree. 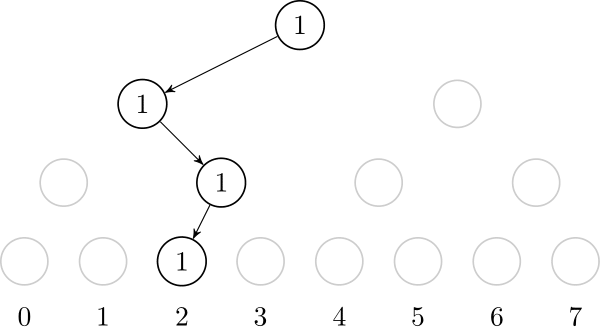 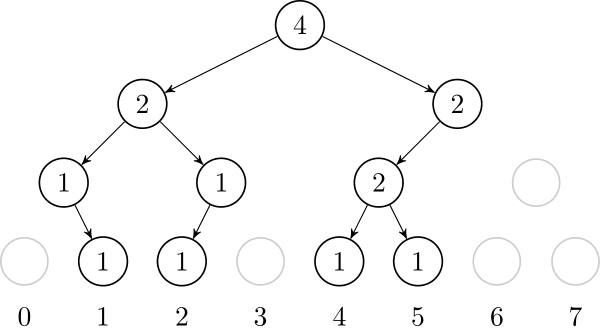 Using this representation, it is very straightforward to implement operations (1), (2) and (3). Operations (4) and (5) are also easy, they are classic segtree operations. To do operation (6), we can go down the tree and either call recursively to the left or right child. Here is a pseudocode of this operation:

It is clear that all these operations cost $$$\mathcal{O}(\log N)$$$. On operation (6), note that we only go down recursively to the left or to the right child.

But what about operation (7)? It turns out that we can merge two structures in the following way: to merge the subtrees defined by nodes l and r, if one of them is empty, just return the other. Otherwise, recursively merge l->left and r->left, and l->right and r->right. After that, we can delete either l or r, because they are now redundant: we only need one of them.

Also, it's easy to change between set and multiset representation. It is also easy to insert $$$x$$$ occurrences of an element at once, just increase the cnt variable of the respective leaf accordingly.

Code
How to use

This code can represent either set of multiset. To create an empty structure:

Most of the operations look similar to std::set: 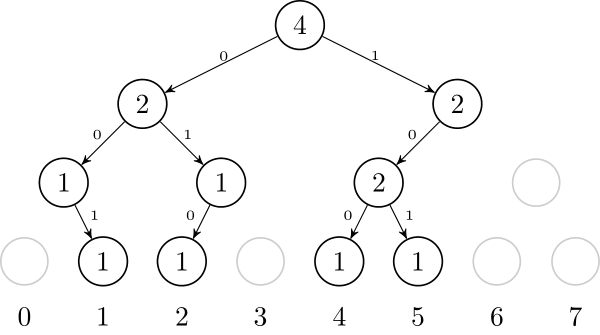 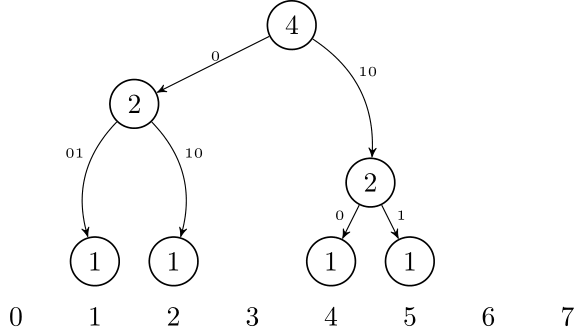 There are some more operations you can do with this data structure. Some of them are:

The memory consumption of the data structure might be a problem, though it can be solved with a more complicated code. The code is already not small at all. Another big downside is the amortized complexity, which leaves us with almost no hope to do rollbacks or to have this structure persistent. Also, the constant factor seems to be quite big, so the structure is not so fast.

The core of the idea was already explained on TLE's blog, and I also found this paper which describes its use as a dictionary (map). Furthermore, while I was writing this, bicsi posted a very cool blog where he shows an easier way to have the memory optimization, but it seems to make the split operation more complicated.

Using this structure to solve these problems is an overkill, but they are the only examples I got.

Create $$$\max(a_i)$$$ instances of this structure, and store on structure $$$i$$$ the indices of occurrences of value $$$i$$$ on the array. Processing the operations is trivial using split and merge operations.

We can represent the array as a concatenation of sorted subarrays, each of them represented by an instances of this structure (initially each of them will contain a single character). If we want to sort a subarray, just split the corresponding structures (if needed) and then merge all of the structures between $$$i$$$ and $$$j$$$. We only make $$$\mathcal{O}(n+q)$$$ splits in total, so the total number of merges is also bounded by that. To sort decreasingly, just have a flag that indicates that that subarray is actually decreasing, and that flag will be used only when we want to split that subarray at an index, then if that flag is set, we need to mirror that index accordingly. You can also check out TLE's explanation here.

UPD: I have implemented the memory optimization for segment trees, you can check it out here: 108428555 (or, alternatively, use this pastebin) Please let me know if there is a better way to implement this.