Click here if you want to know your future CF rating

By stefdasca, history, 2 years ago,

Have you ever wanted to know how will your CF rating look like in the future, without having to be stressed about the potential shortcomings which may come in future contests?

Have you ever wanted to be able to say that you will get the rating of your dreams soon?

If the answer for both of these questions is Yes, then you came to the right place.

During the last few months, I have used some technical analysis to predict how will some of the people from my Discord server and I have gotten quite consistent results, so I think that my strat is working.

I am not going to enter in details on how do I actually do this, because it requires quite some experience to learn all the details, but as people say, an image is worth 1000 words, so here are some few examples.

Here is how his rating looked like in November, before he had a bad contest 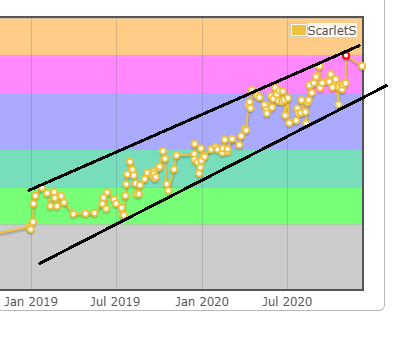 Here I told him that he will fall a bit and the chance for him to rise again is high, and that's what happened 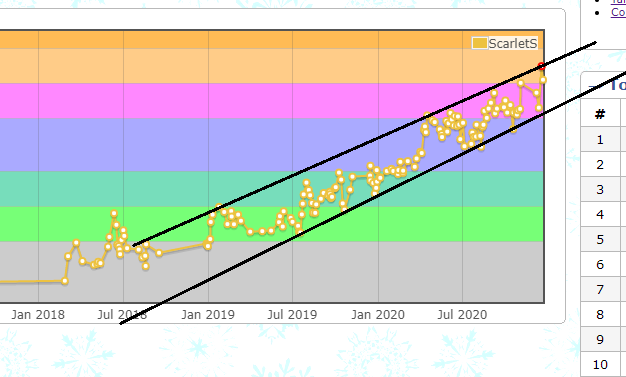 As you can see, a great example of a trendline which held. Hopefully he will keep his uptrend and reach new highs :)

The second example is lookcook

In early December, I told him that he has to be careful at the next contests otherwise bad things can happen

Sadly for him, the rising wedge is starting to play out and he fell to blue

I wish him to make this bearish pattern fail and reach new highs as well, since after all, this is just technical analysis.

Another example is rotavirus

In August, I saw this potential head and shoulders pattern in his chart, which would lead to a downfall.

Sadly for him, this played out too and he fell quite a bit, down to 2100, but hopefully he will rise again as well

However, this doesn't always work, as you can see in Java's graph 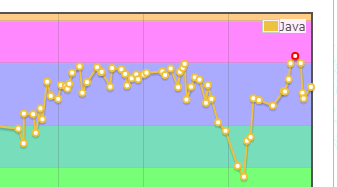 I wish him good luck in actually reaching that target.

If you want to know how will your(or your friends') CF rating will look like, post the handle in the comments or an image of the rating graph and I will come with a reply as soon as possible.

However, this system only works for users with at least 20 contests taken and whose ratings are below 2600(from 2600 on, large swings happen and I can't really consider them as relevant in those persons' future skills)

Good luck and have nice holidays and a wonderful 2021!