Analysis on Trace problem (Code 157B)

The second problem that made its way here is “Trace”, both because it was an interesting problem on its own right and also because I really like Sherlock Holmes’ books.

Apart from having an exciting background story, there is some information we need to take note of if we are to solve this problem correctly:

“ (…) the red and the blue color were alternating, i. e. followed one after the other. The outer area of the wall (the area that lied outside all circles) was painted blue. (…)”

Those two sentences above are the key in solving this problem.

From the first one, we can immediately tell, that the circle with larger radius will be red, and the others will be: blue, red, blue, red, etc, accordingly to the pattern described above. The second sentence, describes to us the definition of concentric circles, and from there we can tell that all circles should be centered on the same arbitrarily chosen origin, in order to respect the constrain of being concentric (we shall choose point (0, 0) on a standard xOy Cartesian plane as the origin). Having the initial setup of the problem cleared out, we shall start thinking on a solution.

On all programming problems, contestants are given some sample input tests, which are there to make sure the reader fully understands the problem statement and can work out some easy cases by hand. However, they play a much larger role as we will see ahead. The first test case given is trivial, we have only one circle whose radius is 1, so, the portion of the wall which should be painted red is the part taken by the whole circle, so the answer is:

This also tells us the precision of the constant pi used by the online judge, and it will suffice to use such precision on our code (so, ultimately, even the simplest test case can provide itself of use).

The second test case is a bit more complex than the previous one, but it’s still possible to work through it by hand. Let’s see what arises as new information to us from it:

We now have three circles of radii 1,4,2 respectively. However, if we follow the convention adopted on the beginning of this editorial, i.e., representing all circles on the same origin point, we see that the order on which they are given on the input it’s not important and that the outer circle (circle with larger radius) will always be painted red, as the plane is painted blue. So, it comes naturally, that this is actually a sorting problem, mixed with some geometry (after all, we have circles involved :p).

So, now all we have to do is sort the given circles in ascending order, and start iterating from the outer to the inner circle, as we know the outer one will be red.

Assume now we have a vector, conveniently called radii, ordered like:

So, as the circle on index 0 will always be red, if index%2 == 0 we sum that area to our answer, if not, we subtract it, and our solution is built…

There can be the case of when the blue area is larger than the red area, case where the result will be correct, but with the sign reversed, so, on that case, if answer is < 0, we output ans*(-1).

This is the case of system test #3, which caught me off guard for such fact, so, considering all scenarios is critical to achieve sucess.

Figure below attempts to illustrate such case and also illustrates what was described during the analysis. 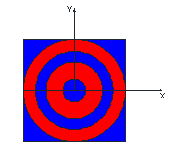 The code itself is straightforward after we follow this analysis on a step by step fashion. The only remark that seems adequate to do is that it's safer to use double data type instead of float, as float would lose precision and yield wrong answer if required precision was 10e-6. 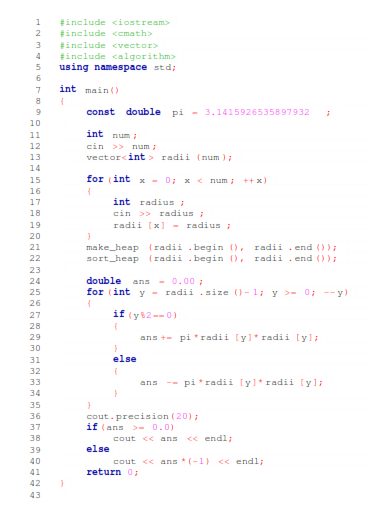 Once again, hope you liked it and suggestions and feedback is very valuable to me as a writer, so thanks for reading!!

Analysis on Plant problem (Code 185A)

The first problem I will be discussing here, is "Plant", where a group of dwarves planted a very interesting recursive plant!! (Maybe the dream of any housewife? :p )

More formally, we have a triangle, that on each new year is filled with one triangle on its inside, according to the following rules:

These two rules will be the basis to build our solution.

obviously, by this notation, the answer to the original problem will be f(U,n-1) (we start on year n-1, and finish at year n, and will only count the number of upwards triangles there)

So, as we can see there's more to this problem than a simple recursive relationship, as the number of up and down triangles after n years will depend on eachother's values. Fortunately, we have a very powerful tool on our arsenal as programmers which is matrix manipulation and more specifically, matrix exponentiation.

As we identified the need of using a matrix to modelate our system initial state, it follows naturally that matrices will need to be used to simulate the evolution (on this case the plant growth rate) of it as well.

Our matrix can be assembled by merging the numbers highlighted in red above, so:

will be the matrix that will model our system and allow us to get a solution, as now it's only a matter of computing the Nth power of this matrix to obtain the answer!!

To implement our idea, we now need to apply any algorithm we know of that does matrix exponentiantion, but, for n as large as 1000000000000000000, a naive exponentiation algorithm won't run in time, and the trick is to use the generalized form of exponentiation by squaring applied to matrices, which can be seen here (more information about the original method extended with modular exponentiation can be found on "Introduction to Algorithms" by Cormen, Leiserson, Rivest & Stein, p.879, Chapter 31, 2nd edition).

Now, to show the implementation, I decided to use Python, as there was an already coded fast exponentiantion algorithm on a GCJ editorial (Round1A 2008), and also, because I think that the Python code is more readable and more suitable for tutorial purposes: 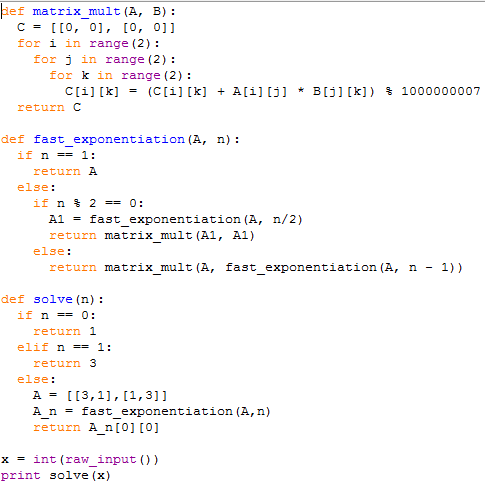 My next goal now, is to be able to replicate this code on C++, in order to get better and better!!

Also, this was my first "editorial" here, I am not sure if you liked it, if it was too long, confuse, etc, etc, but as this is a work in progress any critics and new ideas for future posts will be welcome!

Blog's purpose and a short presentation

My name is Bruno (bruno_oliv), I am from Portugal and I am now trying to get involved with programming competitions in a more serious way!!

I have studied Civil Engineering for the past three years, influenced partially by my family and partially by the crysis Europe was/is going trough.

However, as CS and IT area is an always growing area, this year I made the decision to switch to an Informatics course, which I think I will greatly enjoy!

I decided to start using this little blog we all have to share my own analysis on some of the problems I tackle and successfully solve that I find interesting and challenging to me.

My main aim now, is to improve on some technical issues regarding C++ and ofc learn algorithmic processes by using this site(and others) as a good motivation to do so. I also have some Python experience though you will mostly likely see C++ submissions from me when it comes to contests.

I will write my own ideas here, mainly as a recreative thing to me... Some of the problems might be too easy, or some of the analysis might not be that accurate as the official ones... Nevertheless, I plan to have fun.

Also, watching the most brilliant coders competing here, is reason enough to keep me entertained.

Wish you all the best,