By matrix, history, 5 years ago,

I've tried downloading testcases of BOI 2015 problems from the contest's website. However downloading 3 of 6 problems(EDI, NET, TUG) testdata results in 404 Not found error.

Is there anyone who has access to the testdata of these problems? Could you please share them here?

Hi, Sharif University of Technology is holding an international AI competition. You may read a short description about it below:

This competition will be held in two phases including an online and an on-site phase in which competitors will compete in teams of three in a game designed by our technical team.

The only pre-requisite to enter this competition is familiarity with programming using C++, Java or python. But obviously, knowledge of algorithmic thinking and artificial intelligence will be a great asset for any of the participating teams. The registration for online competition is free and open from february 1st through to february 8th available at http://aichallenge.sharif.edu .

After finishing the online phase which starts on February 9th and continues untill February 17th we will run submitted codes and teams with highest scores will make it to on-site competition. Winners of on-site competition are awarded. For further news and announcment please checkout our blog at http://aichallenge-en.blog.ir or follow @aichallenge on twitter and instagram.

THE COMPETITION IS FIERCE. 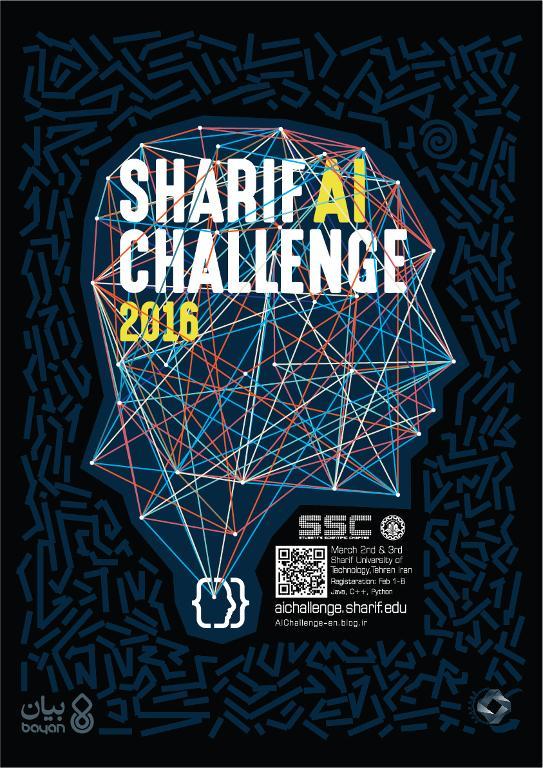 For each digit x you can count the number of digits y that because of some broken sticks x is shown instead of y by hand. for example when x = 3, y can be 3, 8 and 9. Let's denote this number by ax. Then if the input is xy (the first digit shown in the counter is x and the second is y) the answer will be ax × ay.

Consider a string consisting of '(' and ')' characters. Let's build the following sequence from this string:

It can be proven that a string is beautiful if the following conditions are satisfied:

Using the above fact we can prove that if in a beautiful string we remove a ')' character and put it further toward the end of the string the resulting string is beautiful as well. These facts leads us to the following fact: if we can move a ')' character further toward the end of string it is better if we'd do it. This yields the following greedy solution:

Let's define ai as the number of ways to choose some(at least one) non-overlapping substrings of the prefix of s with length i (s1s2... si) so t is a substring of each one of them and si is in one the chosen substrings(So it must actually be the last character of last chosen substring). Then the answer will be

Also let's define two additional sequence q1 and q2 which will help us in calculating a.

The sequence a can then be calculated in O(n) as described below:

We'll first create a rooted tree from the given segments which each node represents a segment. We'll solve the problem using dynamic programming on this tree. First of all let's add a segment [1, n] with probability of being chosen by Malek equal to 0. The node representing this segment will be the root of the tree. Please note by adding this segment the rules described in the statements are still in place.

Let's sort the rest of segments according to their starting point increasing and in case of equality according to their finishing point decreasing. Then we'll put the segment we added in the beginning. A segment's father is the right-most segment which comes before that segment and contains it. Please note that since we added segment [1, n] to the beginning every segment except the added segment has a father. We build the tree by putting a segment's node child of its father's node.

In this tree for each two nodes u and v which none of them are in the subtree on another the segments representing these two nodes will not overlap. Also for each two nodes u and v which u is in subtree of v segment representing node u will be inside(not necessarily strictly) segment representing node v. We define mxi as the maximum money a person in the segment i initially has. mxi can be calculated using RMQ. Let's define ai, j as the probability of that after Malek finishes giving his money the maximum in the segment i is at most {mx}i + j. The properties of the tree we built allows us to calculate ai, j for every i and j in O(q2) (since 1 ≤ i, j ≤ q). If number of the segment we added is k then the answer will be

Calculating ai, j is described below:

. Using this formula we can calculate ak, j recursively and calculate the answer from it in O(q2). The overall complexity will be O(nlgn + q2). nlgn for creating RMQ used for calculating the array mx and q2 for the rest of the algorithm.

We solve this problem by answering queries offline. We'll first store in each vertex v number of vertices such as x for which we must calculate f(v, x) . starting from the root. We'll keep two arrays a and b. Suppose we're at vertex v right now then ai equals d(i, v)2 and bi equal d(i, v). Having these two arrays when moving from vertex v to a child with an edge with weight k one can note that bi for all is inside subtree of v decreases by k and all other bis gets increased by k. Knowing this fact one can also update array a as well. To calculate f(v, x) it's enough to be able to calculate sum of ais for all i inside subtree of x. Handling each of these operations is a well known problem and is possible using a segment tree. Overall complexity is O((n + q)lgn). There is an online solution using dynamic programming as well.

Let's first solve this problem for another game: Suppose that we've an n × n table. Each cell have some(possibly zero) marbles on it. During each move the player chooses a square with side-length at most k which its lower-right cell has at least one marble, he removes one marble from it and puts one marble in every other cell of this square. One can notice that in such game each marble is independent of the others and doesn't affect other marbles. So one can see this game as some separate games played on some tables. More formally for each marble placed in a cell such as (i, j) consider the game when played on a i × j table which the only marble placed on it is at its lower-right cell. Let's denote the Grundy number of this game by gi, j. Then according to Grundy theorem the first player has a winning strategy if and only if the xor of gi, j for every cell (i, j) having odd number of marbles on it is positive.

To calculate gi, j note that the first move in such game must be choosing a square with its lower-right cell being the lower-right cell of table. So the only thing to decide is the side-length of chosen square at the first move. Let's say we choose the first square width side length l. Grundy number of the next state will be equal to xor of gc, d for every i - l < c ≤ i, j - l < d ≤ j. Using this fact one can calculate gi, j for all (1 ≤ i, j ≤ a) (a being an arbitrary integers) in O(a3).

If there is any problem in the editorial please feel free to note that to us.

Codeforces Round #282 will be held at 13th of December, 19:30 MSK. Please don't note anything since the time is the usual time of contests.

We'd like to thank Zlobober who helped us a LOT for preparing the problems, MikeMirzayanov for the Polygon and Codeforces platforms and Delinur for helping us in preparing statements and translating them.

Our special thanks goes to mruxim for testing the round.

The problems will be sorted according to the estimated order of difficulty according to our opinion but we strongly recommend you to read all of the problems.

As always the update regarding score distribution will be posted just before the round starts. :)

UPD: It was written that contest starts at 20:00 MSK. it was a mistake and is fixed now. The round starts at usual time 19:30 MSK.

UPD2: We also thank niyaznigmatul for testing our round.

As you might have noticed, the scores can now be multiples of 250 as well. Let's thank Codeforces team for adding this feature!

Good luck and Have fun!

UPD4: Congratulations to the winners of both divisions:

The editorial for all problems except D and E Div1 are ready and can be found here. It'll be completed soon.

We thank you all for participating and hope you had a good time.

UPD5: The editorial is now complete and can be found here.

For this problem for each light j you could just iterate over all pressed buttons and find the first button bi that bi < j. Then you could output bi and move to next light.

This is our first round in Codeforces and we hope that everything will be fine. The problems were prepared by Amir Keivan Mohtashami(matrix), Farbod Yadegarian(FarbodY) and Gerald Agapov(Gerald). Also special thanks to Mohammad Amin Khashkhashi Moghaddam(alex-mercer) for testing this round.

I want to also thank MikeMirzayanov for Polygon and Codeforces systems, and also Maria Belova(Delinur) for translating the statements.

We wish you a good and challenging round.

UPD: due to technical reasons the round was delayed for 10 minutes. We apologize for any inconvenience caused.