By mnaeraxr, history, 20 months ago,

Competition is over. Is there any editorial available?

I wanted to share with you all acmX, an extension for vscode I started coding half a year ago for myself. Since then it has evolved a lot and it has some features that might be useful for some of you:

Check the wiki to read about all features.

In the vscode install the extension from the marketplace

Check the README for more details.

All the discussion happens in the github issue tracker or in the Telegram group. Feel free to ping me through any of those if you have any suggestion or hit some error.

Thanks Devil and Agile_Eagle for encouraging me write this blog.

By mnaeraxr, history, 2 years ago,

The contest finished few hours ago and there is no blog so far. I'm really interested in learn how to solve problem A and B.

Is there any editorial?

Merkurev forgot how to use polygon

I had a very funny conversation with Merkurev few minutes ago. Apparently he needs help for testing some problems but unfortunately he is not using polygon for that. Moreover it seems he forgot at all how to use polygon (I must say myself Polygon UX is far from perfect, but you hardly forget once you use it).

Some of you may say this was scam Merkurev and not the real one, can you spot the definite clue the turn down his cover? 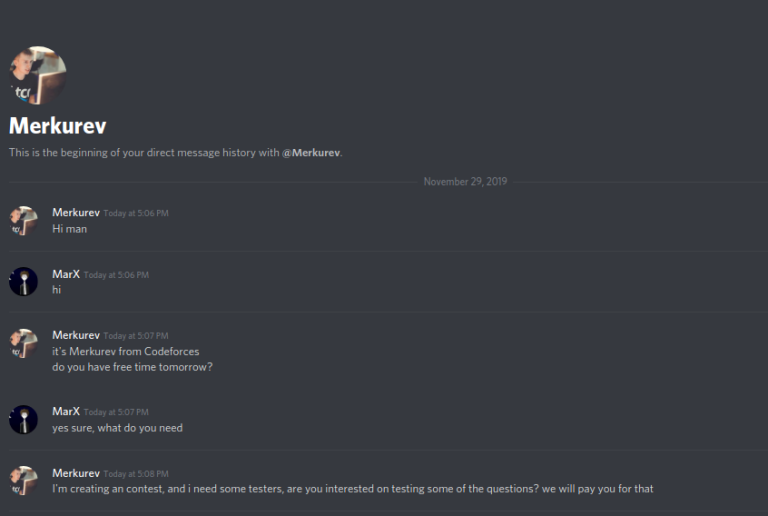 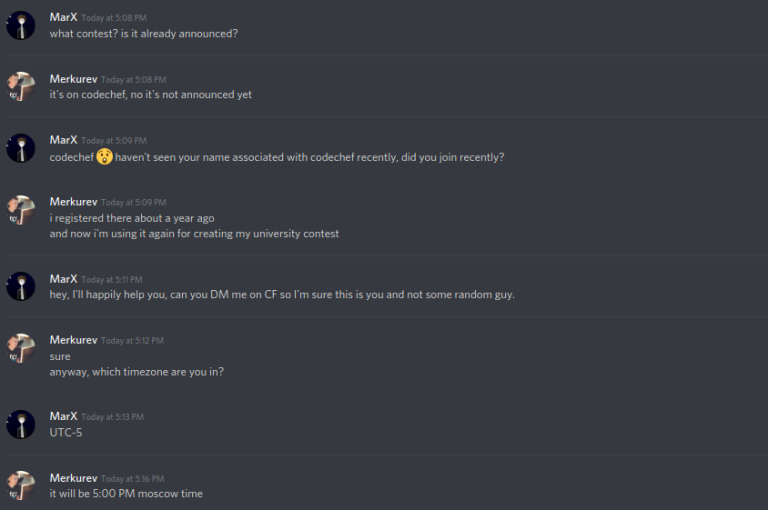 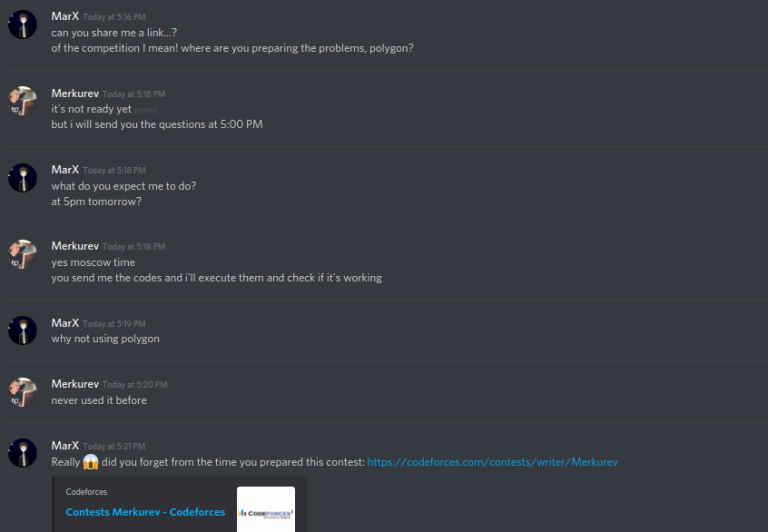 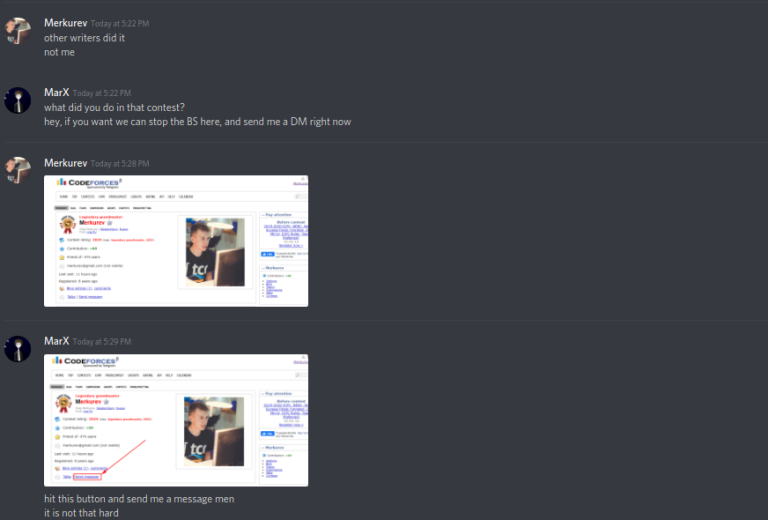 His dashboard is missing a few features for div1 contestants I think... Also it took him 6 minutes changing name, contribution and taking screenshot. 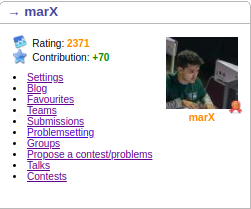 Anyway, beware of random guys in Discord reaching you.

By mnaeraxr, history, 3 years ago,

The COJ system is preparing to celebrate its 9th Anniversary on June 5th, with the start that same day of the COJ Progressive Contest #13, which will last for 15 days until June 20th. More details are available at http://coj.uci.cu/contest/contestview.xhtml?cid=1700 You need to read carefully the AWARDS section!

I ask you to contribute to the promotion of this special contest among your contacts that you think may be interested in participating. We count with your participation in the COJ Progressive Contest #13!

The contest duration is 15 days. In principle, the tasks are in English, but some easy problems may be also in Spanish. The allowed programming languages are C, C++, C++11, C#, Java and Python; however correct solutions will be ensured only for C, C++ and C++11. Judges will not ensure a possible solution for other programming languages. The contest will be held on the rules for Progressive competitions in the COJ. If you have any question, please feel free to ask on coj@uci.cu

To participate you need to have an account in the COJ (for a new account, please use this form). You don't need to register in the contest: the registration in the contest is effective with the first submission.

The challenge is as follows:

About the ranking of the contest:

We are celebrating the 9th Anniversary of the COJ. Then, for this 13th Edition of the COJ Progressive Contest we will have 9 levels of problems, and you need to solve 4 problems from each one to pass to the next level. On the other hand, you can solve 40 problems in the entire contest to see (unblock by special rule) all the problems in all the levels. The value for TPOINTS is 2520 points (in this edition).

The contest will award two gold, two silver, and two bronze medals. These contestants will be awarded with COJ's t-shirts, which will have their logo engraved, as well as messages in allusion to the sponsor and to the contest as well. In addition, other three t-shirts will be randomly sorted between the other contestants solving at least one problem. The t-shirts will be sent by sponsor to the winners. Other awards could be announced later!

Can you get to the last level? Can you solve all the problems? This is the real challenge for you!

We hope that you enjoy it very much. Thank you and have fun!

By mnaeraxr, history, 4 years ago,

We create a mirror on the vjudge with the problems from Kattis.

All problems are not available yet, I'll update the contest as soon as the problems become available.

Enjoy the contest, see you on the standings.

By mnaeraxr, history, 5 years ago,

I found that Petr commented problem 1 on his blog, but he didn't post the idea later.

I am trying to solve a problem on Spoj, but all i get is SIGSEGV on test 10. I just want a second on review on my code to try to figure out what is happening here.

I see each island of the problem (cartesian point with integers coordinates) as an edge between x and y. Then if a build several path alternating colors it guarantees that each island will have a couple on the same row (column) with another color. Of course, each path start on a node with odd degree unless there aren't, so then, i am looking for cycles. If this approach is wrong i need some suggestion, but if it isn't, i just want to know why this answer is getting SIGSEGV.