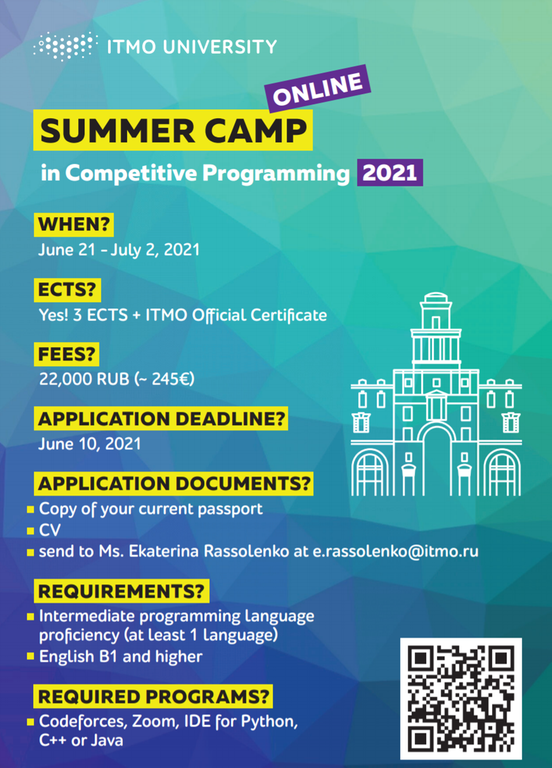 We are announcing ITMO Summer Camp in Competitive Programming that will be held online. On each of the 10 days from June 21 to July 2 (the weekend are the rest days) two-hour lecture and two-hour practice session is going to take place.

Each day one topic is covered, and the practice session is a set of problems of that topic. For lectures we use Zoom, and for practice we use Codeforces. Both will be live, so you can ask questions during the lecture and during the practice, the teacher will help you if you are stuck with your code or didn't get something. The lectures and the problem statements are in English. The school is mostly for Codeforces division 2 and 3 participants. You are required the knowledge of high school math and the ability to code simple programs in C++/Java/Python (or any other language that Codeforces supports, but we are not sure we can help with them).

The main topics are:

The main topics will be covered for sure, but other topics on the official website can be changed depending on average level of students.

The cost of participation is 245 Euro. ITMO Official Certificate will be given to the participants.

If you have any organizational questions (regarding documents, payment, certificates, etc) ask the school manager Ekaterina Rassolenko by emailing to e.rassolenko (at) itmo.ru. The qualification contest will be held this weekend. This is going to be a virtual programming contest for 4 hours, you can start to solve it anytime starting from June, 6th, 2020, 13:00 PM UTC during the following 48 hours. In order to be able to take part in the qualification contest, you should sign up using the link above.

By niyaznigmatul, 18 months ago, translation,

Qualifier duration is 5 hours, there are five problems in the contest. Those, who scored high enough, will be invited to the final contest that takes place on February 22-23, 2020. Those, who already qualified, can compete in second qualifier as well, but they won't influence qualification.

Innopolis Open is only for middle and high school students. All others will be able to solve the problems in Codeforces::Gym.

Previous year contests. Be careful, some of them may be in ICPC format:

On December 23rd at 07:00 UTC we are hosting the second elimination round of our olympiad for high school students. More information on olympiad's website. The rules are IOI-like. Round will last for 5 hours, and consist of 5 problems to solve.

We hosted the first round Innopolis Open, First elimination round, 2018-2019 on December 1st. Those, who already advanced to the final round, can skip the round, but certainly can participate if they want.

Prepared by pashka and YakutovDmitriy

UPD: The round is rescheduled to +1.5 hours to avoid collisions with other events.

On December 17th at 07:00 UTC we are hosting the second elimination round of our olympiad for high school students. More information on olympiad's website.

We hosted the first round Innopolis Open, Elimination round 1, 2017-2018 on December 2nd. Those, who already advanced to the final round, can skip the round, but certainly can participate if they want.

By niyaznigmatul, 4 years ago, translation,

If after that at least one element of array cnt[] is odd the answer is  - 1 (it means that there are odd number of student with such performance and it is impossible to divide them in two. If all elements are even the answer is the sum of absolute values of array cnt divided by 2. In the end we need to divide the answer on 2 because each change will be counted twice with this way of finding the answer.

To solve this problem we need to make k zeroes in the end of number n. Let's look on the given number as on the string and iterate through it beginning from the end (i.e. from the low order digit). Let cnt equals to the number of digits which we reviewed. If the current digit does not equal to zero we need to increase the answer on one. If cnt became equal to k and we reviewed not all digits we need to print the answer.

In the other case we need to remove from the string all digits except one, which equals to zero (if there are more than one such digit we left only one of them). Such digit always exists because the problem statement guaranteed that the answer exists.

In this problem we have to find the last moment of time, when t has p as a subsequence.

Note that changing i-th bit of chosen number doesn't change any bits of any of the variables other than i-th one. Also note that the total number of values is greater, as more variables have 1 at i-th position.

While erasing letters on position p, trie changes like the following: all the edges from one fixed vertex of depth p are merging into one. You can see it on the picture in the sample explanation. After merging of the subtrees we have the only tree — union of subtrees as the result.

Consider the following algorithm. For every vertex v iterate over all the subtrees of v's children except for the children having largest subtree. There is an interesting fact: this algorithm works in

Denote as sx the size of the subtree rooted at vertex x. Let hv be the v's child with the largest subtree, i.e. su ≤ shv for every u — children of v. If u is a child of v and u ≠ hv then

Consider vertex w and look at the moments of time when we have iterated over it. Let's go up through the ancestors of w. Every time we iterate over w the size of the current subtree becomes twice greater. Therefore we could't iterate over w more than

times in total. It proves that time complexity of this algorithm is

How to unite subtrees? First method. Find the largest subtree: it has been already built. Try to add another subtree in the following way. Let's run over smaller subtree's vertices and add new vertices into respective places of larger subtree. As the result we will have the union of the subtrees of v's children. All we need from this union is it's size. After that we need to roll it back. Let's remember all the memory cells, which were changed while merging trees, and their old values. After merging we can restore it's old values in reverse order.

Is it possible to implement merging without rolling back? Second method. Let's take all the subtrees except for the largest one and build their union using new memory. After that we should have two subtrees: the largest one and the union of the rest. We can find size of their union without any changes. Everything we need is to run over one of these trees examining another tree for the existence of respective vertices. After this we can reuse the memory we have used for building new tree.

How to obtain a configuration in which all tiles lie horizontally. Let's go from top to bottom, left to right, and put all the tiles in the correct position. If the tile lie vertically, then try to turn it into the correct position. If it cannot be rotated, because the neighboring tile is oriented differently, proceed recursively to it. Thus, you get a "ladder", which can not go further than n tiles down. At the end of the ladder there will be two tiles, oriented the same way. Making operations from the bottom up, we'll put the top tile in a horizontal position.

Because the target value for this problem is calculated independently for all digits, we'll use the dynamic programming approach. Define dpk, C as the maximum possible cost of digits after we processed k least significant digits in A and C is the set of numbers having the carry in current digit. This information is sufficient to choose the digit in the current position in A and recalculate the C set and DP value for the next digit.

The key observation is that there are only n + 1 possible sets instead of 2n. Consider last k digits of A and Bi. Sort all the length-k suffixes of Bi in descending lexicographical order. Because all these suffixes will be increased by the same value, the property of having the carry is monotone. That means that all possible sets C are the prefixes of length m (0 ≤ m ≤ n) of this sorted list of suffixes. This fact allows us to reduce the number of DP states to O(n·|A|). Sorting all suffixes of Bi can be accomplished using the radix sort, appending the digits to the left and recalculating the order.

The only thing that's left is to make all DP transitions in O(1) time. To do that, maintain the total cost of all digits and the amount of numbers that have the carry. After adding one more number with carry in current digit, these two values can be easily recalculated. After processing all digits in A, we have to handle the remaining digits in Bi (if there are any) and take the best answer. Total running time is

By niyaznigmatul, 4 years ago, translation,

We hope you enjoy the problems!

By niyaznigmatul, 5 years ago, translation, 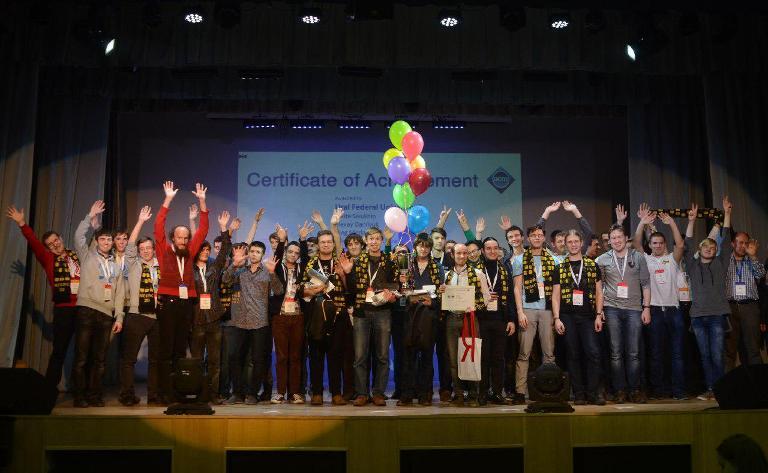