There are $$$n$$$ cities in the country of Berland. Some of them are connected by bidirectional roads in such a way that there exists exactly one path, which visits each road no more than once, between every pair of cities. Each road has its own length. Cities are numbered from $$$1$$$ to $$$n$$$.

Polycarp works as a head analyst at the Berland Ministry of Transport and it's his job to deal with all those $$$m$$$ projects. For the $$$i$$$-th project he is required to choose some cities $$$v$$$ and $$$u$$$ to build the new road of length $$$x_i$$$ between such that the travelling time between the most important cities is maximal possible.

Unfortunately, Polycarp is not a programmer and no analyst in the world is capable to process all projects using only pen and paper.

Thus, he asks you to help him to calculate the maximal possible travelling time between the most important cities for each project. Note that the choice of $$$v$$$ and $$$u$$$ can differ for different projects.

Print $$$m$$$ lines, the $$$j$$$-th line should contain a single integer — the maximal possible travelling time between the most important cities for the $$$j$$$-th project.

The road network from the first example: 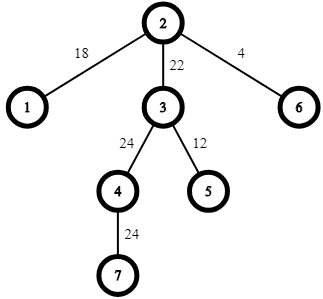