Pasha is a young technician, nevertheless, he has already got a huge goal: to assemble a PC. The first task he has to become familiar with is to assemble an electric scheme.

The scheme Pasha assembled yesterday consists of several wires. Each wire is a segment that connects two points on a plane with integer coordinates within the segment $$$[1, 10^9]$$$.

There are wires of two colors in the scheme:

The imperfection of Pasha's scheme was that the wires were not isolated, so in the points where two wires of different colors intersect, Pasha saw sparks. Pasha wrote down all the points where he saw sparks and obtained a set of $$$n$$$ distinct points. After that he disassembled the scheme.

Next morning Pasha looked at the set of $$$n$$$ points where he had seen sparks and wondered how many wires had he used. Unfortunately, he does not remember that, so he wonders now what is the smallest number of wires he might have used in the scheme. Help him to determine this number and place the wires in such a way that in the resulting scheme the sparks occur in the same places.

Print the description of the scheme in the following format.

No two segments of the same color should have common points. The set of points where sparks appear should be the same as given in the input.

The number of segments $$$(h + v)$$$ should be minimum possible. It's easy to see that the answer always exists. If there are multiple possible answers, print any.

In the first example Pasha could have assembled the following scheme: 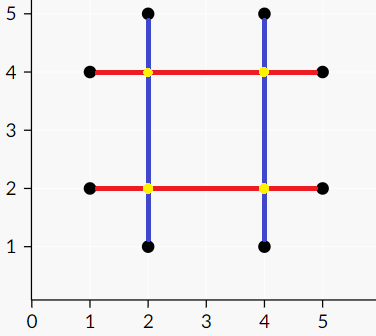