A legendary tree rests deep in the forest. Legend has it that individuals who realize this tree would eternally become a Legendary Grandmaster.

This is your only chance. Your task is to determine the tree and report its edges.

When program has realized the tree and is ready to report the edges, print "ANSWER" in a separate line. Make sure that all letters are capitalized.

Then, print $$$n-1$$$ lines, each containing two space-separated integers, denoting the vertices that are the endpoints of a certain edge. Each edge should be reported exactly once. Your program should then immediately terminate.

For each question that you wish to ask, interact as follows.

After printing a query do not forget to output end of line and flush the output. Otherwise you will get Idleness limit exceeded. To do this, use:

If your program asks too many questions, asks an invalid question or does not correctly follow the interaction guideline above, it may receive an arbitrary verdict. Otherwise, your program will receive the Wrong Answer verdict if it reports an incorrect tree.

Note that the tree is fixed beforehand and does not depend on your queries.

Hacks should be formatted as follows.

In the sample, the tree is as follows. 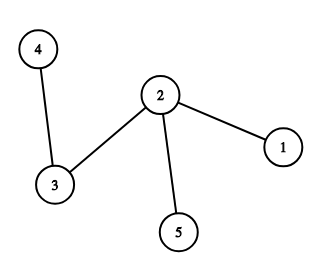