In a magical land there are $$$n$$$ cities conveniently numbered $$$1, 2, \dots, n$$$. Some pairs of these cities are connected by magical colored roads. Magic is unstable, so at any time, new roads may appear between two cities.

Vicky the witch has been tasked with performing deliveries between some pairs of cities. However, Vicky is a beginner, so she can only complete a delivery if she can move from her starting city to her destination city through a double rainbow. A double rainbow is a sequence of cities $$$c_1, c_2, \dots, c_k$$$ satisfying the following properties:

Vicky has a list of events in chronological order, where each event is either a delivery she must perform, or appearance of a new road. Help her determine which of her deliveries she will be able to complete.

Then $$$q$$$ lines follow, describing the events. Each event is one of the following two types:

The following picture corresponds to the sample. 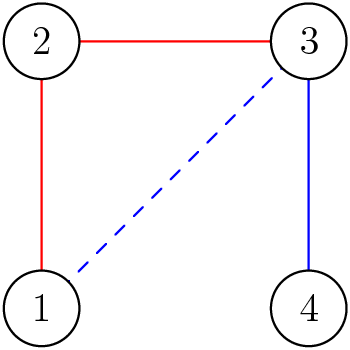