We chose a hidden node $$$x$$$. In order to find this node, you can ask queries of two types:

Can you find $$$x$$$ in no more than $$$36$$$ queries? The hidden node is fixed in each test beforehand and does not depend on your queries.

To print the answer, print "! x" (without quotes).

To ask a question, print it in one of the formats above:

After each question, you should read the answer: either the distance or the second vertex on the path, as mentioned in the legend.

If we answer with $$$-1$$$ instead of a valid answer, that means you exceeded the number of queries, made an invalid query, or violated the condition in the second type of queries. Exit immediately after receiving $$$-1$$$ and you will see Wrong answer verdict. Otherwise, you can get an arbitrary verdict because your solution will continue to read from a closed stream.

After printing a query, do not forget to output end of line and flush the output. Otherwise, you will get Idleness limit exceeded. To do this, use: 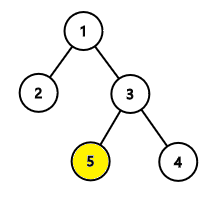