Berland Gardeners United Inc. hired you for the project called "SmartGarden". The main feature of this project is automatic garden watering. 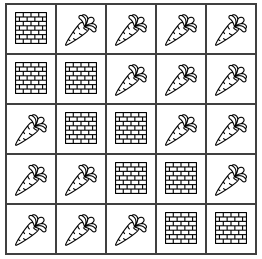 During implementation of the project you created a smart robot that takes a list of commands as an input, which are processed one by one. Each command contains:

While executing each command robot waters only cells in the intersection of specified rows and specified columns. So, if you specify $$$r$$$ rows and $$$c$$$ columns, then exactly $$$r \cdot c$$$ cells will be watered.

In the demo for the customer you have tuned robot in such a way that it waters all the garden. To do that you prepared a single command containing all $$$n$$$ rows and all $$$n$$$ columns.

Unfortunately, 5 hours before the demo for your customer it turned out that the CEO of Berland Gardeners United Inc. was going to take part in it. Moreover, most probably he will be standing on a garden slab during the demo!

Now you need to create a list of commands for the robot so that it waters all the plants and doesn't water any cell containing a slab. Since it's only a beta version of "SmartGarden", the total number of commands shouldn't exceed $$$50$$$.

Create a program that, for a given size of the garden, will find a list of no more than $$$50$$$ commands that allow the robot to water all the plants in the garden without watering the slabs. It is allowed to water a plant several times.

If there are multiple ways to water the garden, print any of them.