→ Languages
The following languages are only available languages for the problems from the contest
Kotlin Heroes: Episode 3:
→ Virtual participation
Virtual contest is a way to take part in past contest, as close as possible to participation on time. It is supported only ICPC mode for virtual contests. If you've seen these problems, a virtual contest is not for you - solve these problems in the archive. If you just want to solve some problem from a contest, a virtual contest is not for you - solve this problem in the archive. Never use someone else's code, read the tutorials or communicate with other person during a virtual contest.
→ Problem tags
*special problem
dfs and similar
trees
No tag edit access
→ Contest materials
The problem statement has recently been changed. View the changes.
×

Treeland consists of $$$n$$$ cities and $$$n-1$$$ two-way roads connecting pairs of cities. From every city, you can reach every other city moving only by the roads. You are right, the system of cities and roads in this country forms an undirected tree.

The government has announced a program for the modernization of urban infrastructure of some cities. You have been assigned to select an arbitrary subset of cities $$$S$$$ to upgrade (potentially all the cities) that satisfies the following requirements: 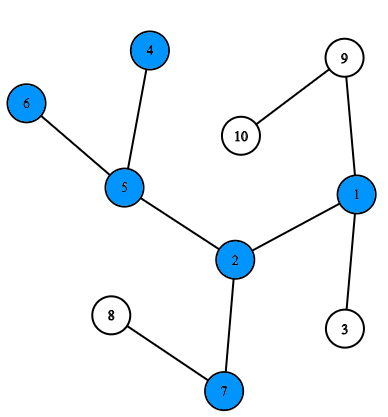 Help Treeland upgrade its cities. Find any of the possible subsets $$$S$$$ or determine that such a subset does not exist.

For each test case print Yes or No (in any case, upper or lower), depending on whether the answer exists or not. If the answer exists, then print an integer $$$m$$$ ($$$1 \le m \le n$$$) — the number of cities in the found subset. Then print $$$m$$$ different numbers from $$$1$$$ to $$$n$$$ — the numbers of the cities in the found subset. City numbers can be printed in any order. If there are several answers, print any of them.