Rating changes for last rounds are temporarily rolled back. They will be returned soon. ×
→ Virtual participation
Virtual contest is a way to take part in past contest, as close as possible to participation on time. It is supported only ICPC mode for virtual contests. If you've seen these problems, a virtual contest is not for you - solve these problems in the archive. If you just want to solve some problem from a contest, a virtual contest is not for you - solve this problem in the archive. Never use someone else's code, read the tutorials or communicate with other person during a virtual contest.
→ Problem tags
graphs
interactive
probabilities
*3000
No tag edit access
→ Contest materials
The problem statement has recently been changed. View the changes.
×

Unfortunately, a mistake was found in the proof of the author's solution to this problem. Currently, we don't know the absolutely correct solution. However, you can solve this task, but if your solution passes all the tests, it is not guaranteed to be correct. If your solution has passed all the tests and you are sure that it is correct, you can write to one of the contest authors about it.

Surely you all read the book "Alice in Wonderland". In this task, Nastya got to the country of Three strange Bees. The bees are strange because their honeycombs are pentagonal. Nastya got there illegally, so she wants bees not to catch her. Help the bees punish the intruder!

A beehive is a connected undirected graph where bees and Nastya can move along the edges. A graph satisfies two properties:

There are three bees and Nastya. You play for bees. Firstly, you choose the vertices where you put the bees. Then Nastya chooses another vertex in which she will initially appear. One move is first moving the bees, then Nastya, in turn:

You win if at least one of the bees and Nastya are in the same vertex at any time of the game.

If this situation does not occur after $$$n$$$ moves, then you lose.

Several bees can be in the same vertex.

At each turn, you must output exactly three vertices $$$a, b, c$$$ $$$(1 \leq a, b, c \leq n)$$$. For the first time, $$$3$$$ vertices displayed will indicate which vertices you originally placed bees on. In response, you will receive the vertex where the jury placed Nastya. Each next $$$3$$$ vertices will indicate where the $$$3$$$ bees move at your turn. Each of the bees can, regardless of other bees, both remain at the current vertex and move along the edge. After the next output of $$$3$$$ vertices, in response, you get the number of the new vertex to which Nastya went.

Your solution may receive the verdict Idleness Limit Exceeded if you don't output anything or forget to flush the output buffer.

To flush the output buffer, you need to do the following immediately after printing the query and the line end:

In this problem interactor is adaptive. This means that depending on all your previous moves, Nastya's behavior may change.

Hacks are not available for this problem.

Let Nastya be a green chip, and three numbered red ones are three bees.

In the first test, the movement of the heroes looks like this. 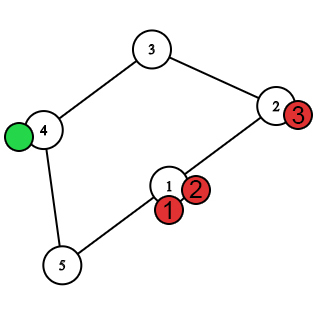 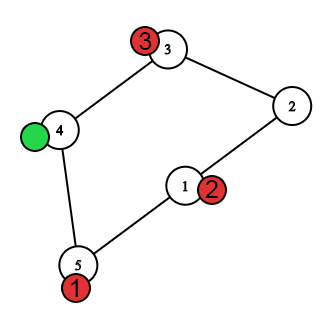 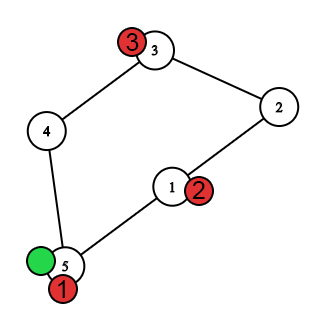 The first move after the Nastya's move. The first bee caught Nastya.

In the second test, the movement of the heroes looks like this. 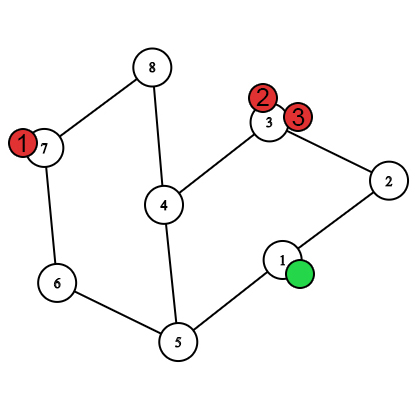 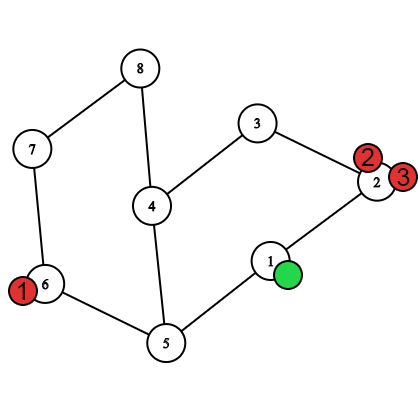 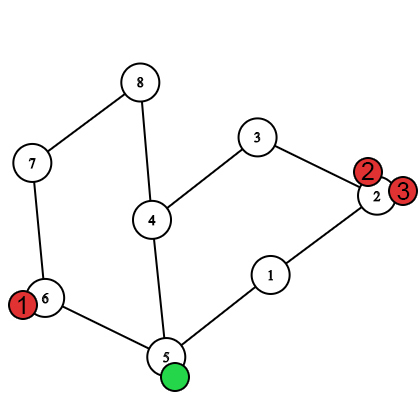 The first move after the Nastya's move. 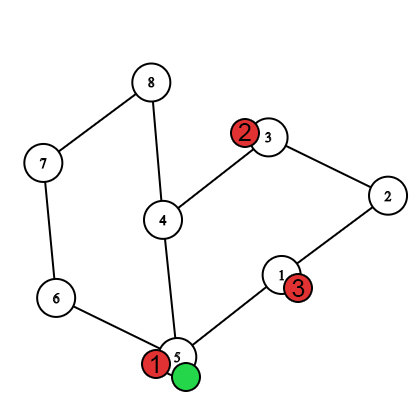