The inhabitants of Chess Land are usually mentioned as pieces in everyday language, and there are $$$5$$$ specific types of them roaming the land: pawns, rooks, bishops, queens and kings. Contrary to popular belief, chivalry is long dead in Chess Land, so there are no knights to be found.

Each piece is unique in the way it moves around from square to square: in one step,

In the following figure, we marked by X the squares each piece can move to in a single step (here, the rows are numbered from bottom to top, and the columns from left to right). 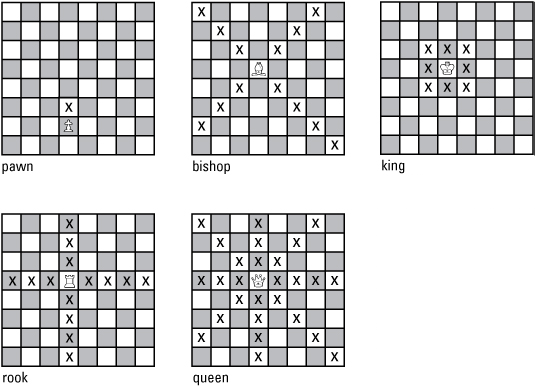 Recently, Chess Land has become a dangerous place: pieces that are passing through the land can get captured unexpectedly by unknown forces and simply disappear. As a consequence, they would like to reach their destinations as fast (i.e. in as few moves) as possible, and they are also interested in the number of different ways it is possible for them to reach it, using the minimal number of steps – because more paths being available could mean lower chances of getting captured. Two paths are considered different if they differ in at least one visited square.

For this problem, let us assume that pieces are entering Chess Land in a given column of row $$$1$$$, and exit the land in a given column of row $$$R$$$. Your task is to answer $$$Q$$$ questions: given the type of a piece, the column it enters row $$$1$$$ and the column it must reach in row $$$R$$$ in order to exit, compute the minimal number of moves it has to make in Chess Land, and the number of different ways it is able to do so.

Each line consists of

If it is impossible to reach the target square, output the line "0 0".

You can download the above example and an additional (bigger) sample input here: https://gofile.io/d/GDzwfC