Alice and Bob are playing a fun game of tree tag.

Initially, Alice is located at vertex $$$a$$$, and Bob at vertex $$$b$$$. They take turns alternately, and Alice makes the first move. In a move, Alice can jump to a vertex with distance at most $$$da$$$ from the current vertex. And in a move, Bob can jump to a vertex with distance at most $$$db$$$ from the current vertex. The distance between two vertices is defined as the number of edges on the unique simple path between them. In particular, either player is allowed to stay at the same vertex in a move. Note that when performing a move, a player only occupies the starting and ending vertices of their move, not the vertices between them.

Determine the winner if both players play optimally.

For each test case, output a single line containing the winner of the game: "Alice" or "Bob".

In the first test case, Alice can win by moving to vertex $$$1$$$. Then wherever Bob moves next, Alice will be able to move to the same vertex on the next move. 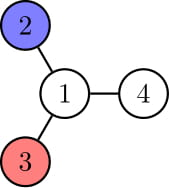 In the second test case, Bob has the following strategy to win. Wherever Alice moves, Bob will always move to whichever of the two vertices $$$1$$$ or $$$6$$$ is farthest from Alice.