A rare article in the Internet is posted without a possibility to comment it. On a Polycarp's website each article has comments feed.

Each comment on Polycarp's website is a non-empty string consisting of uppercase and lowercase letters of English alphabet. Comments have tree-like structure, that means each comment except root comments (comments of the highest level) has exactly one parent comment. 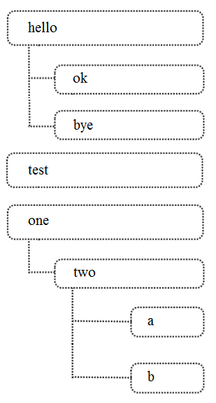 The first line contains non-empty comments feed in the described format. It consists of uppercase and lowercase letters of English alphabet, digits and commas.

It is guaranteed that each comment is a non-empty string consisting of uppercase and lowercase English characters. Each of the number of comments is integer (consisting of at least one digit), and either equals 0 or does not contain leading zeros.

The length of the whole string does not exceed 106. It is guaranteed that given structure of comments is valid.

Print comments in a format that is given in the statement. For each level of nesting, comments should be printed in the order they are given in the input.

The first example is explained in the statements.