→ Virtual participation
Virtual contest is a way to take part in past contest, as close as possible to participation on time. It is supported only ICPC mode for virtual contests. If you've seen these problems, a virtual contest is not for you - solve these problems in the archive. If you just want to solve some problem from a contest, a virtual contest is not for you - solve this problem in the archive. Never use someone else's code, read the tutorials or communicate with other person during a virtual contest.
→ Custom contest rules
This round has an unusual addition to the rules. For each problem you must use distinct language. Thus, if you have a submission that has passed at least one test or is being tested at the moment, then for this task you can use only this language and can not use it for other tasks. More details can be read by the link. Different implementations of the same language are considered to be the same language (for example, in C++ you can only solve one problem, regardless of the exact chosen compiler).
→ Problem tags
*special problem
number theory
*2700
No tag edit access
→ Contest materials
The problem statement has recently been changed. View the changes.
×

Arkadiy has lots square photos with size a × a. He wants to put some of them on a rectangular wall with size h × w.

The photos which Arkadiy will put on the wall must form a rectangular grid and the distances between neighboring vertically and horizontally photos and also the distances between outside rows and columns of photos to the nearest bound of the wall must be equal to x, where x is some non-negative real number. Look on the picture below for better understanding of the statement. 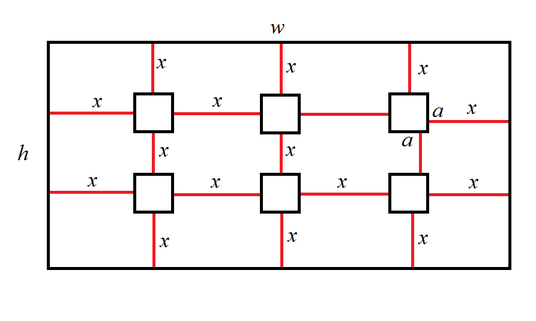 Arkadiy haven't chosen yet how many photos he would put on the wall, however, he want to put at least one photo. Your task is to determine the minimum value of x which can be obtained after putting photos, or report that there is no way to put positive number of photos and satisfy all the constraints. Suppose that Arkadiy has enough photos to make any valid arrangement according to the constraints.

Note that Arkadiy wants to put at least one photo on the wall. The photos should not overlap, should completely lie inside the wall bounds and should have sides parallel to the wall sides.

Print one non-negative real number — the minimum value of x which can be obtained after putting the photos on the wall. The absolute or the relative error of the answer must not exceed 10 - 6.

Print -1 if there is no way to put positive number of photos and satisfy the constraints.

In the first example Arkadiy can put 7 rows of photos with 5 photos in each row, so the minimum value of x equals to 0.5.

In the second example Arkadiy can put only 1 photo which will take the whole wall, so the minimum value of x equals to 0.

In the third example there is no way to put positive number of photos and satisfy the constraints described in the statement, so the answer is -1.